Today the weightlifting world said goodbye to Yurik Vardanyan, the holder of the second highest Sinclair ever.

To say that Yurik Vardanyan was an incredible weightlifter does not do him justice. To say that he was one the top few weightlifters ever and certainly a candidate for the greatest of all time is about right. Yurik was not just an incredible weightlifter, he was also one of the greatest all-around athletes of all time. During his long career, Vardanyan became an Olympic champion, won seven world championships, won five European Championships, and held 41 world records. On top of this he won the Friendship cup four times as well as many other Soviet competitions.

Born in 1956 in Armenia, Yurik competed for the USSR. His first competition as a senior was in 1977 but before that Yurik had shown promise already. He won the 1975 and 1976 Junior World Championships as a -75 lifter. In 1976, at just twenty years of age, he hit 155.5 and 193 in the -75 class to set the snatch, clean and jerk, and total world records – a solid start to any career! His senior international debut year, 1977,  couldn’t have gone any better either. Yurik furthered the world record in the snatch and total and became a European and world champion at only twenty years of age. He also won the Friendship Cup in Lithuania that year.

In 1978, Yurik made the move from the -75 middleweight class up to the light-heavyweight -82.5 class for which he became most famous. He went from strength to strength, winning the 1978 and 1979 World Championships as well as the European Championships in 1978. By the end of 1979, Yurik had set fifteen world Records in his new class.  He bumped the snatch world record from 170 up to 175.5 and the clean and jerk from 210 to 215. But, as impressive as these years had been, he had not yet scratched the surface of his capabilities. The 1979 World Championships had been good for another reason. He had beaten his rival Blagoy Blagoev.  Blagoev and Asen Zlatev would become Yurik’s most fierce competitors.

At the press conference after his win at the 1979 World Championships in Greece – his third successive title – he told the press that, at the Olympics in Moscow the next year, he would total 400. This was an extraordinary claim for someone who held the world record total at 390. Yes, he had increased it by fifteen kilos already over the past year from 375, but another ten was an outlandish aim. 400 was a barrier that most believed impossible. Yurik recalled to his son Norik that many of those there laughed out loud at him, thinking him stupid for having such a goal. In their defense, he had just totaled 370 at the World Championships, some thirty kilos below his self proclaimed goal for the following year.

Although Yurik did not hit those exact numbers at the 1980 Olympics in Moscow, the outcome was the same. After beating Blagoev in the snatch with 177.5, he then opened with 205 in the clean and jerk for the win. He jumped to a world record 215.5 on his second attempt, before honouring his vow of a 400 total by attempting a seven and a half kilo world record with 222.5, which he made. He had done it – his astonishing levels of self-belief had allowed him to achieve his goal and surpass what the rest of the world thought possible. He had also beaten Blogoev by twenty seven and a half kilos in the total. Compared with today’s slightly heavier -85 class, Vardanyan was four kilos above the world record total weighing only 81.7. Impressively, Vardanyan had also out-totalled the two classes above him: the -90 and -100 weight classes.

Yurik then chose to move up briefly to the 90kg class. Even at that body weight, Vardanyan did have some incredible success. At the 1982 USSR Championships in Dnepropetrovsk, he snatched a world record 188 followed by another world record 190, he then clean and jerked an enormous 228. He only weighed 87 in the 90 class.

After 1982, Vardanyan dropped back down to the -82.5 class where he continued to dominate the world scene. That year he managed to bump the world record snatch up to 180.5 and ended up winning both the European and World Championships. This meant he was an Olympic champion and a six-time world Champion by the age of twenty-seven.

At the 1983 World Championships, Vardanyan had a tough battle with Asen Zlatev, beating him by only two and a half kilos. Vardanyan said that without the competition between him, Zlatev, and Blagoev, they would never have crossed the 400 barrier.

Yurik then prepared for the 1984 Olympics in high spirits. But, as you have now heard many times in this book, the Soviet Union led a boycott of these Olympics in response to the USA-led boycott of the previous games in Moscow. So, Vardanyan’s dreams of a second Olympic gold were shattered. Instead he headed to Varna for the 1984 Friendship cup, where he delivered the second greatest performance that any human has ever delivered.

In Varna, Vardanyan went head to head with Asen Zlatev. Zlatev made 175 in the snatch, which unbelievably was the weight that Vardanyan courageously opened at. After making it, Vardanyan jumped to 181.5 to set a new world record, then took 182.5 straight after. That snatch is over 400 lb by a man who weighed around 180 lb. In the clean and jerk, Zlatev made 210 as his best. Vardanyan opened at 215, from there jumping to 220. Then, to the astonishment of the crowd, he went for 224 for a four kilo world record. These six lifts truly symbolize the art and skill of weightlifting.

What makes this feat even more amazing is that Vardanyan’s best front squat at the time was only 230! He had managed to front squat 200 for a set of five prior to competition and in his mind that meant that he knew he had the potential for something truly remarkable. Many weightlifters aim to reach certain levels of efficiency in the lifts, but none have reached Vardanyan’s level. He believed that if he could front squat it then he could clean and jerk it. He developed this theory in part because he had so many knee troubles. In fact, in between attempts in competition it was not uncommon for the Soviet team doctors to come and drain fluid from Yurik’s knees to allow him to hit the required depth to lift more weight.

Vardanyan decided to put his theory about clean and jerking his maximum front squat to the test at Varna. He took a fourth attempt, which would count as a world record clean and jerk but not for the total. He requested that 230 be loaded for his fourth attempt. In one of the most valiant attempts in strength sport history, Yurik Vardanyan managed to clean the weight, but was unable to successfully make the jerk. The winning total in his weight class from the Los Angeles Olympics was 355 by Romania’s Petre Becheru, forty-nine kilos less than Vardanyan. He even out-totalled the winner of the -110 class a the Olympics by fourteen kilos. He was only out-totalled in the entire Olympic Games to two men in the superheavy class. ‘Robbed’ doesn’t do it justice.

Yurik Vardanyan competed at one more World Championships in 1985, which he won by snatching 177.5 and again clean and jerking a routine 220. This would have been far from routine for anybody else!

Whilst Yurik never competed internationally again, he did continue training for the following few years as part of the Soviet national team. His goal was to win the 1988 Olympics in Seoul. To this day, he feels disappointed with his one Olympic gold. In 1976 he had an opportunity to go but because of his young age and inexperience the coaches didn’t feel confident with him yet. In 1980 he proved that he could win on the biggest stage but in 1984 he could not compete again because of the Soviet boycott. Yurik mentioned that in 1988, he had a falling out with some of the Soviet coaches who were apparently taking bribes from the Bulgarian team. Vardanyan was still capable at the time of a 400 total but was not selected for the Olympics by the bribed Soviet coaches who ultimately called the shots. This whole debacle resulted in Yurik spitting in the face of someone’s face because they robbed him of the opportunity of competing in a second Olympics.

The main characteristic of Vardanyan was that he was a perfectionist. There are videos of him practicing his dip and drive with an empty bar in a Soviet training hall. He believed that technique was everything. It was for this reason that lifters like Anatoly Khrapaty would try to beat him in training all the time. Yurik believed that this was a good thing – if people were trying to beat him, he must have been in the lead. His supreme confidence as an athlete shone through and he developed a training system unlike all others. He would do many similar exercises, squatting and pulling three times a week, predominantly using sets of three. He also included a large amount of jump training. Despite his weak squat, he did have strong hamstrings, one time performing a clean pull with 300 at the end of a training session. Even during his strength work Yurik believed that grinding should not be allowed and valued speed in the squat over anything else, routinely dropping down five kilos if the load caused him to slow down too much. He also never pushed the weight in the snatch or clean and jerk to maximum in training; that was reserved for competition. One of the most extraordinary things about Yurik was that the most weight he ever snatched in training was 175, yet he made 190 in competition. He only clean and jerked 215, but made 228 in competition. Despite his laser focus and attention to detail, he didn’t take results too seriously. He would remark to his son in the years after his competition that results don’t matter: ‘even at the Olympics, life goes on.’

One of my favourite stories about Yurik comes from his son. Yurik and his team had turned up to the gym on a light day with the intention of simply going to the sauna. In the training hall was a barbell loaded with 160 lying on the floor. Yurik and his team started making bets as to who could lift it cold. Yurik said that he could and took the bet. As he went over to grab an empty barbell to warm up, the others told him that he was not allowed to, so he simply grabbed a chair and sat down. He said that in his mind he went through his entire warm-up up until the 160. His heart rate increased and he even began sweating in anticipation of the lift. Then he walked over to it and snatched 160 cold.

After his career as an athlete, due to his popularity in his home country of Armenia, he got into politics. After the dismantling of the Soviet Union he refused various requests for support from the Russian government and was essentially forced to leave the country, moving to the USA. Nearly three decades later he still works in politics.

More than all but one other, Yurik Vardanyan voluntarily shouldered the burden of being the person who pushed against and broke through the boundaries of what others in the sport believed was possible.

Yurik, your hard work has influenced and inspired many generations and will continue to do so. You will be missed. 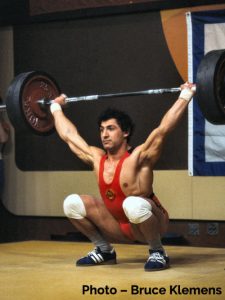 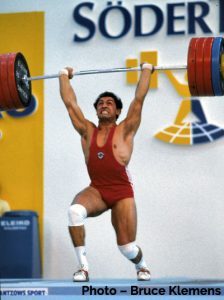 2 thoughts on “In memory of Yurik Vardanyan”