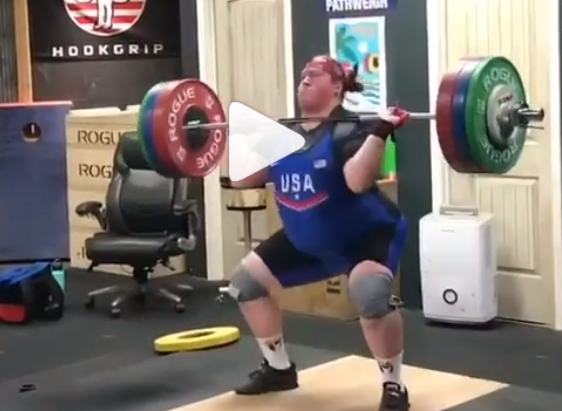 2017 World Champion Sarah Robles just hit a 140kg power clean & power jerk, an enormous lift for the women’s +87kg weight class. At her last competition, the 2018 WWC, Sarah placed 5th with a 6 for 6 128/162/290kg performance setting personal bests in both lifts and new American records in the clean & jerk and total, equaling Cheryl Haworth’s 128kg American record from 2003. This performance does now allow Sarah to say that no female from the USA has ever out-lifted her in either event! Only one other USA weightlifter could ever say that: Shane Hamman.

Sarah has become known among other things for never missing a lift in competition. Even her 162kg competition PR from Ashgabat 2018 looked below her maximal threshold. Even so this particularly comfortable looking power clean and power jerk sits at over 86% of her best in the full lift. This is very high for someone who doesn’t train the power versions of the lifts. In fact Sarah commented on her Instagram page saying that ‘power cleans have been a challenge for me. I wasn’t really taught them in my beginning years.’ Well if that’s a relatively untrained variation then God help us all! I suppose we should expect nothing less from the Olympic bronze medalist and world champion herself.

Seb OstrowiczI am the owner of Weightlifting House. When I'm not working on the site/podcasting/interviewing I spend my time training, coaching, and competing in the sport of Weightlifting.
Posted in:
News, Training Lifts
Tagged:
Power Clean
Leave a Reply Cancel reply