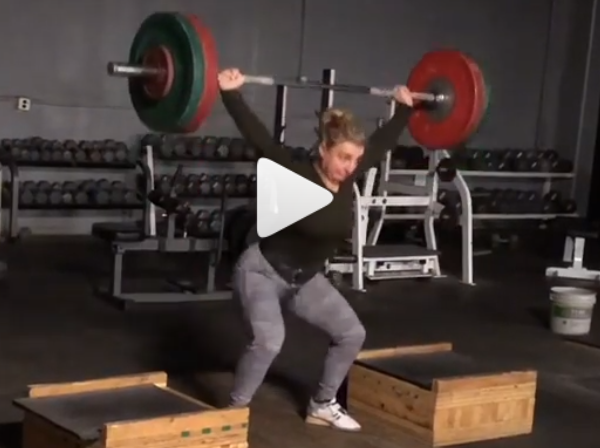 71kg Kate Nye hit some big power PRs off blocks this week, the first and more debatable of the two was a 90kg power snatch, the second was a 120kg block power clean, an amazing lift for someone who’s best clean & jerk is 130kg – that’s 92%. The power snatch was a 2kg PR and the power clean was a 6kg PR, not bad during a volume phase!

The American record holder is in an exciting race as she hopes to secure her spot for the 2020 Olympics against some exceedingly steep competition. Her place will come only by beating her two closest rivals, Meredith Alwine (listen to her interview here) and Mattie Rogers. Mattie’s competition clean and jerk is 134kg (135kg including local meets), Meredith’s is 133kg, and Kate’s is 130kg. Kate has out-snatched the other two in competition though with her 107kg American record snatch from the American open finals. Kate is now just 10kg shy of the World Standard in the snatch set at 117kg and 22kg below the World Record in the clean & jerk of 152kg held by China’s Zhang Wangli. At just 20 years of age Kate has years left to reach those numbers.

Kate Nye (born Jan 5 1999) is the American record holder in the snatch in the 71kg weight category with 107kg. She was the silver medalist at the 2018 Junior World Weightlifting Championships where she went 100/125/225kg. Kate also holds 5 Junior American records spread across 3 weight classes (63kg, 69kg, 71kg). Kate has best lifts of 107kg and 130kg in the snatch and clean & jerk respectively. She competes for Team Hercules.

Seb OstrowiczI am the owner of Weightlifting House. When I'm not working on the site/podcasting/interviewing I spend my time training, coaching, and competing in the sport of Weightlifting.
Posted in:
News, Training Lifts
Tagged:
Blocks, Power Clean, Power Snatch, PR
Leave a Reply Cancel reply