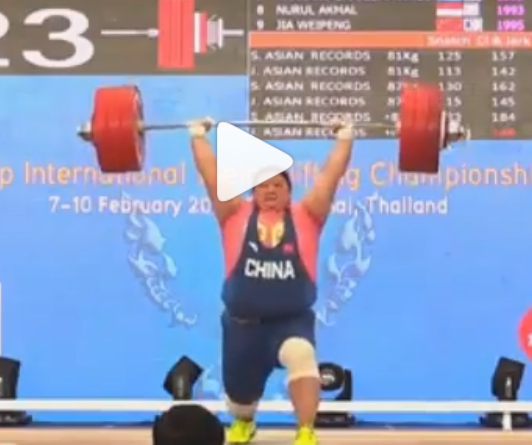 The Chinese super heavy Zhou Xiaoman competed last weekend at the IWF Egat Cup, an Olympic qualifying event in Thailand. Zhou took a very comfortable win in both lifts and of course the total over her teammate and silver medalist Jia Weipeng (116 / 153 / 269 kg) and the bronze medalist from Korea Lee Seonmi (120 /148 / 268 kg). Zhou’s lifts of a 141 kg snatch and a 180 kg clean and jerk gave her a total of 321 kg, a total which would have placed her 3rd at the 2018 WWC, 25 kg above the current bronze medalist and just 6 kg below teammate and silver medalist Meng Suping.

This is where things get particularly interesting. Zhou Xiaoman went on to attempt a 186 kg world record on her third attempt but the loaders ended up placing the 0.5 kg fractional plates on the outside of the 2.5 kg collars. As is the case with the strongest women in the super heavy weight class, the lifts are becoming so heavy that the plates are barely able to fit onto the barbell any more. A few years ago some of the top athletes in that class were questioned as to the utility of a new 30 kg plate, though the athletes voted against its use. As Zhou Xiaoman attempted to lift the world record 186 kg lift the 0.5 kg plates ended up falling off the barbell, leaving just 185 kg as she attempted the jerk which she ended up missing. Due to the loading error she was of course granted a 4th attempt, though the strenuous exertion of her first world record attempt proved too much for her. Could the disruption of balance caused by the falling of the 0.5 kg plates have caused her to miss? Possibly, possibly not. But the question shouldn’t have to be asked.

At the 2017 National Games she totaled an enormous 326 kg but was overshadowed by her teammate Meng Suping who totaled 3 kg higher. Considering that Zhou placed 4th at the 2018 Chinese nationals and went 138/175/313 this is a strong step up. She weighed in at 161 kg at those national games, the heaviest in her class. 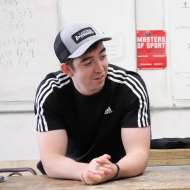 Seb OstrowiczI am the owner of Weightlifting House. When I'm not working on the site/podcasting/interviewing I spend my time training, coaching, and competing in the sport of Weightlifting.
Posted in:
Competition Lifts, News
Tagged:
Egat Cup, front-page, world record attempt