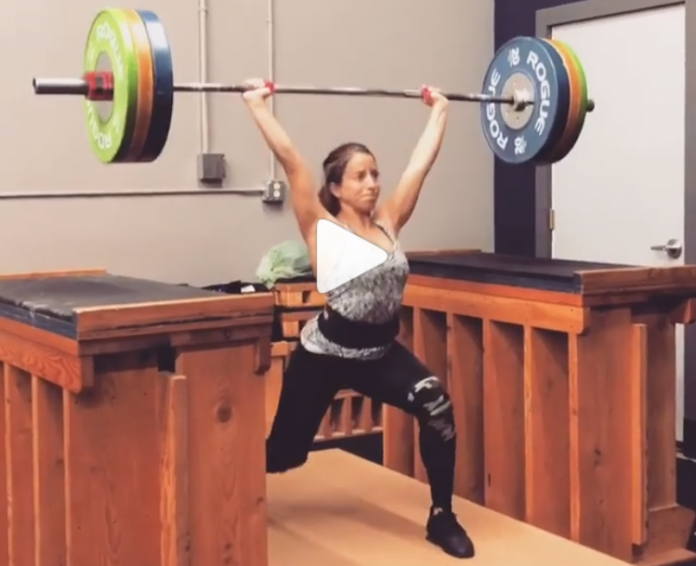 49 kg Team USA athlete Kathleen has hit some enormous lifts in training, pushing the envelope alongside Alyssa Ritchey of what any American at that body weight has been able to lift. The first lift from this week that really blew us away was Kathleen’s jerk double at 105 kg!

To put this lift into perspective, the American record in the now old 48 kg class was 102.5 kg by Kara Nott from the year 2000. That record stood for 18 years against many phenomenal athletes, including Olympian Morghan King. The new American Standard, a standard that seems particularly challenging considering the previous American record, is 106 kg. So Kathleen is at this point jerking just 1 kg below that American Standard.

If you were wondering whether or not Kathleen had the leg strength to make the full lift, a few days later later under the scrutiny of her coach Steve Gough she went on to clean 105 kg for a relatively comfortable single off blocks. Perhaps even more exciting, Kathleen proceeded this lift with an 84 kg snatch from the blocks, a weight equal to the American Record Standard in her new 49 kg weight class and 1 kg over the old 48 kg record snatch of 83 kg by Morghan King, set at the Rio Olympics.

Already on the cusp of the snatch and clean and jerk American records, Kathleen has remained one of the most exciting weightlifters to watch in USA Weightlifting.

Kathleen Winters (1993) is a 49 kg weightlifter from Team Montana where she is coached by Steve Gough and Mike Karchut. Kathleen is one of only 8 women in USAW history to clean and jerk double body weight, a feat she accomplished in early 2018, a 102 kg clean and jerk at under 51 kg in body weight. Kathleen began weightlifting at the age of 19 and by the time she was 22 years old she had made it on a world team.

Kathleen competed at the 2012 Junior World Championships in the 53 kg class where she placed 12th and totaled 159 kg. She improved on her total at the Junior Pan American Championships with a 160 kg total and a silver medal in the total. At the 2015 World Championships in Houston Kathleen placed 28th, 5 places behind teammate Morghan King. There she went 75 / 90 / 165 kg.

This is part one in the new Weightlifting House YouTube series where we take you into the most competitive, most elite training...
Read more
Lifts