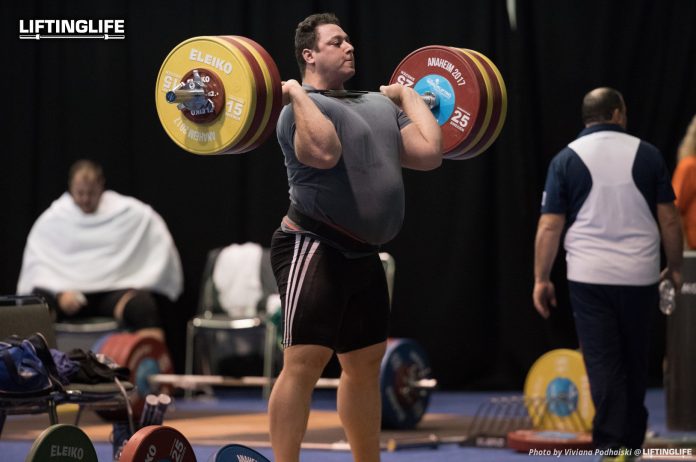 Iran Team for Asian Weightlifting Championships – All There Is To Know

The 2019 Asian Championships runs from April 18th to 28th and is a gold-tier Olympic qualification event, meaning that athletes who total will receive a 10% Robi point bonus. In other words, this is a very important meet, the final gold tier even of the first six month qualifying period. Check out our Tokyo 2020 Qualification Guide.

Masoud Chatraei – Masoud famously snatched 165 kg as a 77 kg weightlifter back in 2013. Since that time Masoud has rarely competed internationally. His last appearance was at the 2017 Summer Universiade where he snatched 159 kg but bombed in the clean and jerk.

Despite Masoud’s 165 kg snatch, it took him a further two years to make the national team. Having spoken with Masoud on the phone recently, he explained to me that training during the build-up to the Asian Championships has been very tough with the team training as much as two to three times a day, consisting predominantly of heavy singles.

The 2015 junior worlds clean and jerk gold medalist will be competing at his third Asian Championships having competed at the 2015 and 2016 continental champs.

Despite Kianoush’s unparalleled résumé on this Iranian team, his spot on the Tokyo 2020 Olympics is by no means guaranteed. His teammate Sohrab Moradi, the six-time world record holder and Olympic champion, who is also competing for the Olympic spot. Moradi is currently awaiting spinal surgery in Germany. To learn more about the battle between the two Olympic champions read this article.

While Sohrab Moradi has put up the bigger numbers, his spinal surgery has definitely placed Kianoush Rostami back into the driver’s seat.

Ayoub Mousavi – Despite lacking the social following of several other Iranian weightlifters, Ayoub Mousavi has had a very successful career so far, winning ten international medals, five of which are in the total. Mousavi is the 2017 Islamic Solidarity Games champion, the 2017 World Championships bronze medalist, the 2017 Fajr Cup bronze medalist, and perhaps most crucially he is the 2016 and 2017 Asian Championships silver medalist across the 85 kg and 94 kg weight classes.

With best international lifts of a 171 kg snatch and a 214 kg clean and jerk from the 2017 WWCs, Ayoub will only have to emulate those lifts to remain above the silver medal level from last year’s results. Bearing in mind that the only heavier lifts came from the now bed-ridden Sohrab Moradi, it is possible that Ayoub can make a push for the gold medal. He will have to contend with teammate Kianoush Rostami and the young sensation from Qatar, Meso Hassona, who believes he might be ready to break the 230 kg world record.

Amir Hoghougi – The once 96 kg weightlifter has been forced to move up to the 102 kg class due to the sensational level of competition in the lower weight class. Hoghougi last competed at the 2018 world championships having missed the 5th annual Fajr Cup. At the 2018 WWCs Amir Hoghougi (96 kg) placed 12th with a 167 kg snatch and a 207 kg clean and jerk, eclipsed in the total by 42 kg by his teammate Sohrab Moradi.

In training we have seen Hoghouni snatch 170 kg off blocks and clean and jerk 212 kg. Given the recent increase in body weight it seems likely we can expect a total closing in on the 400 kg boundary.

Reza Beiralvand – The world bronze medalist returns for another gold tier qualifier. Having gone five for six at the 2018 World Championships in Ashgabat with a 175 kg snatch and a 218 kg clean and jerk, Reza is on pace to eventually overtake the current 102 kg world champion and his own teammate Ali Hashemi. Due to his strong clean and jerk, if Reza can push his snatch into the 180s, he stands a chance at taking the gold in the total: Don’t forget, he won the clean and jerk gold medal in Ashgabat…

Kia Ghadami – Kia is one of the most exciting athletes in the Iranian team because, like many of the world’s greats, he has a clean and jerk that can win championships. With best training lifts of a 193 kg snatch and a 241 kg unofficial world record clean and jerk, Kia is able to pull out big final attempts, something that is lacking among many of the Asian 109s who will be competing at the Asian Championships. The most recent example of Kia’s exceptional clean and jerk came at the Fajr Cup, where he jumped from 211 kg to 231 kg to leapfrog Arturs Plesnieks in the total.

Ali Hashemi – the two-time world champion only has two goals for this competition. Firstly, he wants to build on his Robi points from the 2018 World Championships. Secondly, he wants to win the gold medal and will almost certainly be disappointed with anything else. Ali Hashemi has taken gold in his last two competitions: the 2018 World Championships and the 2019 Fajr Cup, where he his best total of 404 kg with a 182 kg snatch and a 222 kg clean and jerk. Hashemi has competition lifts of 184 kg and 222 kg.

Having spent the later part of 2018 in the 102 kg class Ali Hashemi has now made the move up to the 109 kg class, a necessary move for Olympic qualification with the 102 kg class absent from the Olympic categories. Despite a dominant two years of competition Ali Hashemi will now face new competitors as a 109 kg lifter, namely the Armenian world champion Simon Martirosyan, a fiercely strong competitor. Unfortunately for us we will not see these two greats face-off until the 2019 World Championships. The duel that we may witness this April at the Asian Championships will be between Ali Hashemi and the Chinese 109 Yang Zhe, whose silver medal and 419 kg total from the 2018 world championships will require a big personal best from Ali Hashemi if he is to compete for gold.

Saeid Alihosseini – Perhaps the most interesting name on the list is Saeid Alihosseini, the snatch, clean and jerk, and total junior world record holder. Due to injury we haven’t seen Alihosseini compete since the 2018 Asian Weightlifting Championships where he placed second with a 208 kg/ 248 kg/ 456 kg performance. Alihosseini’s general strength has always been what has made him one of the most exciting weightlifters to watch, regularly beckoning the question ‘why doesn’t he add more weight?’. His 251 kg clean and jerk from the 2017 World Championships is a great example of the apparent ease with which he handles near world record weights.

I spoke with national team member Masoud Chatraei this morning who told me that Alihosseini has only just returned to training and is not yet in good shape. His old age and proneness to injury are causing him many difficulties.

Alihosseini’s last two international totals of 454 kg and 456 kg would have placed him second behind the ‘dominant regardless of era’ Lasha Talakhadze. If he can return to the Asian Championships in April in the same shape as his last few competitions then the only thing that will prevent him from taking the gold medal will be his own mind, something that has got in his way in previous performances…

Ali Davoudi – The new addition to the Iranian super heavyweight dynasty is the new junior world record holder Ali Davoudi, whose competition lifts of 197 kg/ 231 kg from the 2018 world championships and the 2019 Fajr Cup have put him in the history books at only 19 years of age. The 2018 junior world champion has now got five junior international wins under his belt and is surely not far from his first senior win.

All information about the 2019 Asian Championships will be uploaded here