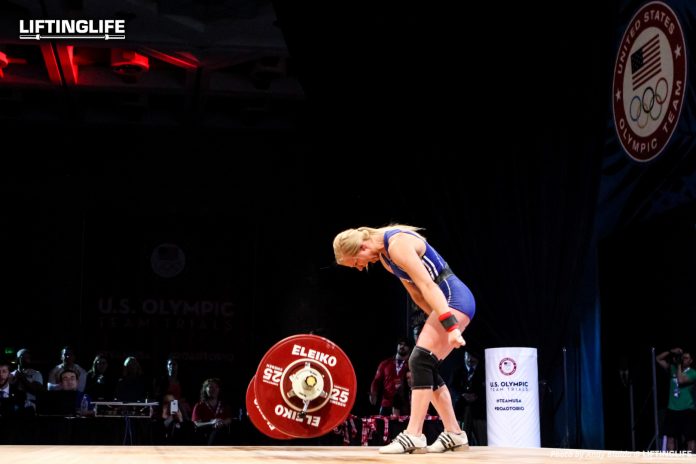 Cortney Batchelor – Why I Keep Coming Back

This article is one of our podcast-to-article features that we will be doing here at Weightlifting House – taking the most interesting podcast information from the greatest athletes and coaches around the world and turning them into the written form.

Podcast link at the bottom of the page

Last week I had the pleasure of interviewing Cortney Batchelor (-49 kg) one of the most experienced weightlifters in USAW. Cortney Bachelor is not only an American record holder in the snatch, but she has also trained under many of the best coaches in the USA, but she is also a business owner, and she has over 11 years of experience at a high level in the sport.

Of the many fascinating topics that we covered on the podcast, a few really stuck out, predominantly her battle with the jerk, her competition oriented mindset, and the bright light that keeps pulling her in closer to the sport – her unreached potential.

‘Competing internationally is night and day from competing nationally’

The American Record – Her Greatest Moment

Over the span of her career, Cortney has competed at several World Championships (2014, 2013), Pan American Championships, and is a two time National Champion.

Perhaps her greatest moment, as she recalled, came from the American Open Series 1 in Reno 2017 where she snatched an American record 87 kg in the -53 kg class. What adds to the magnitude of this record is that technically it was her second American record, not her first. Back in 2016 Cortney had equaled the American record snatch of 86 kg, a record that had been hit by Charis Chan just months earlier. As it transpired Charis Chan was later banned from competition having “tested positive for the presence of epitrenbolone, which is a metabolite of trenbolone” – USADA. In 2016 Cortney was robbed of her ability to celebrate what was an amazing moment in her career, her first American record. It was this that made her next American record of 87 kg all the more poignant.

In the build-up to her second American record, Cortney had snatched 90 kg in training and had attempted the 87 kg in competition a few times, even throwing it over her head and missing it behind.

‘You know when you just get fed up with things and you have missed it so many times and you are just like “alright this is it you just have to do this this is ridiculous” … it was probably one of the easiest lifts I have ever made.’

Training before the American record

The training which led up to her American record included ‘lots of squats and pulls‘ which she mentioned was classic of her coach at the time, Max Aita. During this time her legs were so strong that she back squatted 150 kg for a triple, that’s 2.83 times her body weight! No wonder she is known as a born squatter. According to Cortney this style of training really helped her snatch but not her jerk. She mentioned that she ‘could probably clean 110 – 115 kg, but could only jerk 95 kg.’

‘I was mentally terrified of the jerk’

Cortney spoke in detail about how she is undergoing the challenge of building a stronger jerk. Her current coach, Ursula Garza, has made it a number one priority in training for her, adding in some brutal overhead complexes. Cortney describes it as doing ‘every type of jerk possible including clean jerks where you don’t pause after the clean.’

They have begun treating the clean and the jerk as one lift rather than two. This is typical of many top lifters, whose clean and jerks look so similar from rep to rep, particularly through their use of oscillation, that you almost can’t separate the two parts cleanly without losing a bit of each (check out Ilya as an example). Having treated the clean and jerk as two separate lifts throughout her career Cortney has ended up losing tightness after the clean. She spoke about having felt at times ‘mentally terrified of the jerk‘, talking herself out of it time and time again. Everything relaxes after the clean and she can’t find tension again – ‘it just squishes me!‘

How have your coaches differed?

Below are some of Cortney’s remarks on several of the coaches she has trained under throughout her career.

Ursula Garza
‘Ursula is a great fit. She understands me as a person more than an athlete and that makes a huge difference… it’s a totally different program than I have done before… With Max and Zygmunt I understood their program and I could come in on any given day and know within five kilos what I was going to hit that day. With Ursula, I have no idea. She doesn’t program week by week she programs every ten days so I can’t find a pattern which is good for me because I need some surprise.’

Zygmunt Smalcerz
‘We did a lot of volume in the lifts. Squatting and pulling not so much.’ In reference to her time at the OTC under Zygmunt Cortney said this – ‘looking back on it it was fantastic, my housing was paid for, we were being paid to be there, food was paid for, any kind of recovery method that we needed was right down the hall, it was insane. I wish I was a little older when I was there because I don’t think I appreciated it as much as I would now.’

Max Aita
‘Lots of squatting, pulling and pressing.’ Another factor that Cortney believed led to her American record success was that Max only programmed her five training sessions a week, unlike the nine sessions that she was doing under Zygmunt. This allowed her to feel fresher and more prepared heading into each training session.

‘I do a visualisation, I have to find a pink ball in a black room’

On the topic of cutting

Cortney clearly hates cutting, referring to it as ‘the worst.’ She spoke about Ursula’s ‘Boiling System’ – First you sit in a bathtub with water as hot as you can bear for eight minutes. Ursula then ‘burritos’ Cortney in towels for 20-30 minutes. This process is then repeated until all of the weight is off. ‘The diet part is easy compared to the cut. Still, my body naturally wants to stay at 52/53 kg so I have to always be dieting just to sit at 51 kg.’

One of the things that clearly bothered Cortney was the lack of understanding that people have as to the difficulty of dropping weight classes without completely resetting all new personal bests. Cortney has competed in the 63 kg, 58 kg, 53 kg, and finally 49 kg weight classes, and has, as she very proudly mentioned, maintained her strength all throughout. She referenced her 137 kg front squat that she made as a 58 kg lifter, something she can still do having dropped 15% of her body weight.

During the podcast, Cortney began to tell us about her rituals for competition, or lack thereof! This was an interesting theme that ran throughout Cortney’s interview. She doesn’t place much emphasis on anything that does not directly correlate with performance, rather she focuses on the things that do. Too many rituals to rely on can become problematic when they go away and ultimately can pose as more of a crutch to performance than a benefit. ‘I make sure I have my weightlifting gear and singlet, and that’s it… I was once told that something is only an issue if you make it an issue, so I try not to make it an issue.’

‘The biggest thing is that I know what I am capable of, but I’m just not there yet’

Step One – ‘I’m supposed to have a picture – in mind – of what it looks like looking out from the platform to the crowd.’

Step Two – ‘I have to be aware of what is going on around me. That way when I am at a competition outside things that are new don’t bother me. Because training is a controlled environment I can control whether it is quieter or louder, but there are loads of variables I cannot control at a meet, so I want to be as aware as possible of everything going on around me in training so that when I go to a meet it doesn’t effect me.‘

Step Three – ‘Right before I touch the bar I do a visualisation, I have to find a pink ball in a black room, it’s for me finding my centre really quick… I’ve become aware of everything going on, now I need five seconds to zone in. I find that, I take the lift, and then everything goes back to normal until I go to take another lift and then I do the exact same thing over again.’

Why do you keep coming back? Potential…

‘I feel like I still have something to prove because I know that a lot of people think that I am starting to phase out, that I’ve hit my peak because I continue to drop weight classes, but people don’t realise that when you drop a weight class and you maintain your numbers it’s really f***ing good!‘

How many hours do you get a night? – ‘Twelve – I love to sleep! Realistically I probably get eight to ten hours’

Who are your favourite lifters? – ‘I don’t have a lot of international lifters that are impressive to me just because of drugs, and I hate saying that… But nationally it would be Amanda Sandoval & Melanie Roach‘.

What is your favourite exercise? – ‘Drop snatch, but it scares me a lot‘

Least favourite exercise? – ‘Squatting, I just happen to be good at it… it’s because it comes so easy to me it is just kind of boring.‘

What numbers do you want to hit in competition? – ‘88/107 kg. Realistically I will have to hit those numbers to make the Olympics.‘

We covered a huge amount more than this, including all about her business ‘The Snort Life Singlets‘, and her plans for competition as we head towards the Tokyo 2020 Olympics.

That’s a champions mindset right there.

A record number of 50,514 weightlifting fans voted for the 2019 IWF World Weightlifter of the Year. It is certainly reassuring to...
Read more
Interviews

Jon North Interview | Understanding the Technical Model of the Pull

Jon North rose to fame in the weightlifting world a decade ago, in part due to his charismatic and extreme training videos,...
Read more
Articles

The 6th International Solidarity Weightlifting Championships is a qualification event for the 2020 Tokyo Olympic Games. This competition is a silver tier...
Read more
Articles

You will be hard-pressed to find a weightlifter who isn’t looking to further develop their squat (back, front) max or technical execution....
Read more
Articles