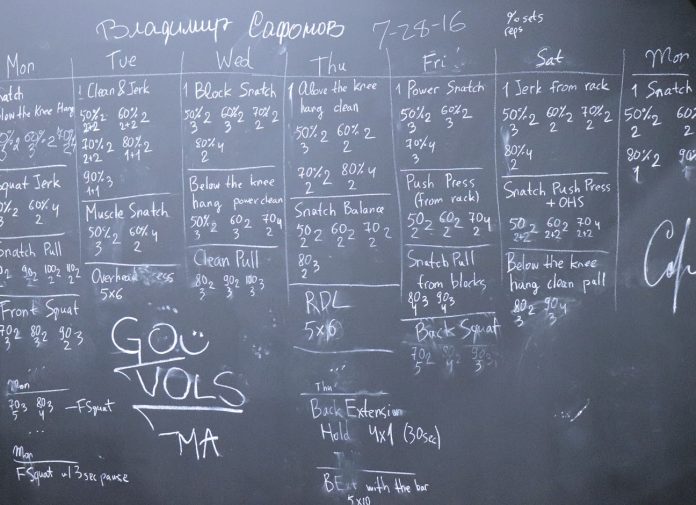 Two days in Cincinnati, Ohio – a total of 16 hours with Vladimir Safonov, Russian National coach, and a lot of lifting. Steven D’s gym hosted Vladimir and it was more than equipped to handle the number of people attending. There were plenty of platforms and all of the equipment was Eleiko. There was no reason not to lift to the best of your ability.

First, I’ll describe the set-up of the seminar, how it was structured, what we did, and other information relevant to people curious about attending one in the future. Then I will divulge the details of Vladimir’s approach to coaching the lifts, programming, and working with athletes – basically, the supporting rationale to why he does what he does.

Disclaimer: I will try to provide the specific information given to us by Vladimir and I will denote the addition of my opinions or information provided by the gym owner, Steve. I do not represent Vladimir in any way. Let us continue…

When we arrived we all had a short meet and greet with Vlad, giving names and reasons for attending. Vlad went on to describe how he was introduced to the sport. His father pushed him to do it, starting at 6 years old. He then competed for quite some time, eventually peaking at 160/192 weighing 90kg. Injury derailed his athletic career and from then on he started coaching kids, working his way up the pecking order. He has now coached European, World, and Olympic medalists. After the we were then moved to the platforms where the real learning began.

We were introduced to a variety of exercises common in Vlad’s programming, with a few them being: snatch grip push press + overhead squat, snatch pull, hang snatch, snatch balance, behind the neck jerk, squat jerk, clean, clean + jerk, and probably a few more that I’m forgetting. A few of the big technique takeaway from this day were:

Next, we will cover the programming takeaways from day one. First and foremost, if you take anything away from this article it should be what Vlad repeated over and over throughout the time we spent with him. Programming (and a portion of technique) should all be specific to the individual. There are non-negotiables, a template if you will, but how that template is filled in depends solely on the person. Examples of differences include how much training they can handle, what injuries they are dealing with, their individual weaknesses and strong points. Everything is custom and trying to write one plan for every person is a fool’s errand. Here are the other important concepts from Vlad’s discussion of programming:

The next day was a bit more of the same, including this time a question and answer portion after we finished up training. We did go through other variations, how they should be performed, and covered more of the commonly used variations in Vlad’s programming. The Q&A will be posted for all to watch and hopefully illustrate a bit of what I have said up to this point.

After performing the snatch variations we did push presses – heavy, and then wrapped up with some paused snatch pulls (3 seconds), also heavy. As I mentioned above, pauses are used frequently in Vlad’s programming, for both squats and pulls. Once all of the barbell work was done we went on to perform some jumps. Vlad loves to use box jumps, but we only had hurdles (which Steve prefers). Here are a few of the technique takeaways from day two:

Day two’s programming talk was a little bit more informative. We discussed lift ratios, how Vlad views sex differences in programming, and quite a bit more. Again, the importance was placed on the individual and the need to attack weaknesses. This means you start with the weakness most impacting performance and try to remedy that before switching too much of your focus elsewhere. If you tightrope jerks, but can’t rack the clean it doesn’t matter how bad your jerk is. You need to target the limiter in the lifts. Here are a few of the programming takeaways from day two:

The question and answer to follow was incredibly informative and includes a wealth of information that may not have been touched on in this write-up. I left that separately, so you can hear it from Vlad. It will be posted as a podcast and/or an actual video (links here). If you have any questions beyond that, feel free to reach out to me, Steve, or Vlad. Even better, attend a seminar yourself. There are countless stories, bits of information, etc. that couldn’t be included due to space constraints and respect for the athlete’s/Vlad’s privacy. Those are only things you can experience at the seminar! I hope you all enjoyed this insight into the Vladimir Safonov seminar at Steven D’s gym.

You can listen to a full recording of the Safonov Q&A on the Weightlifting House Patreon page. You can sign-up here.