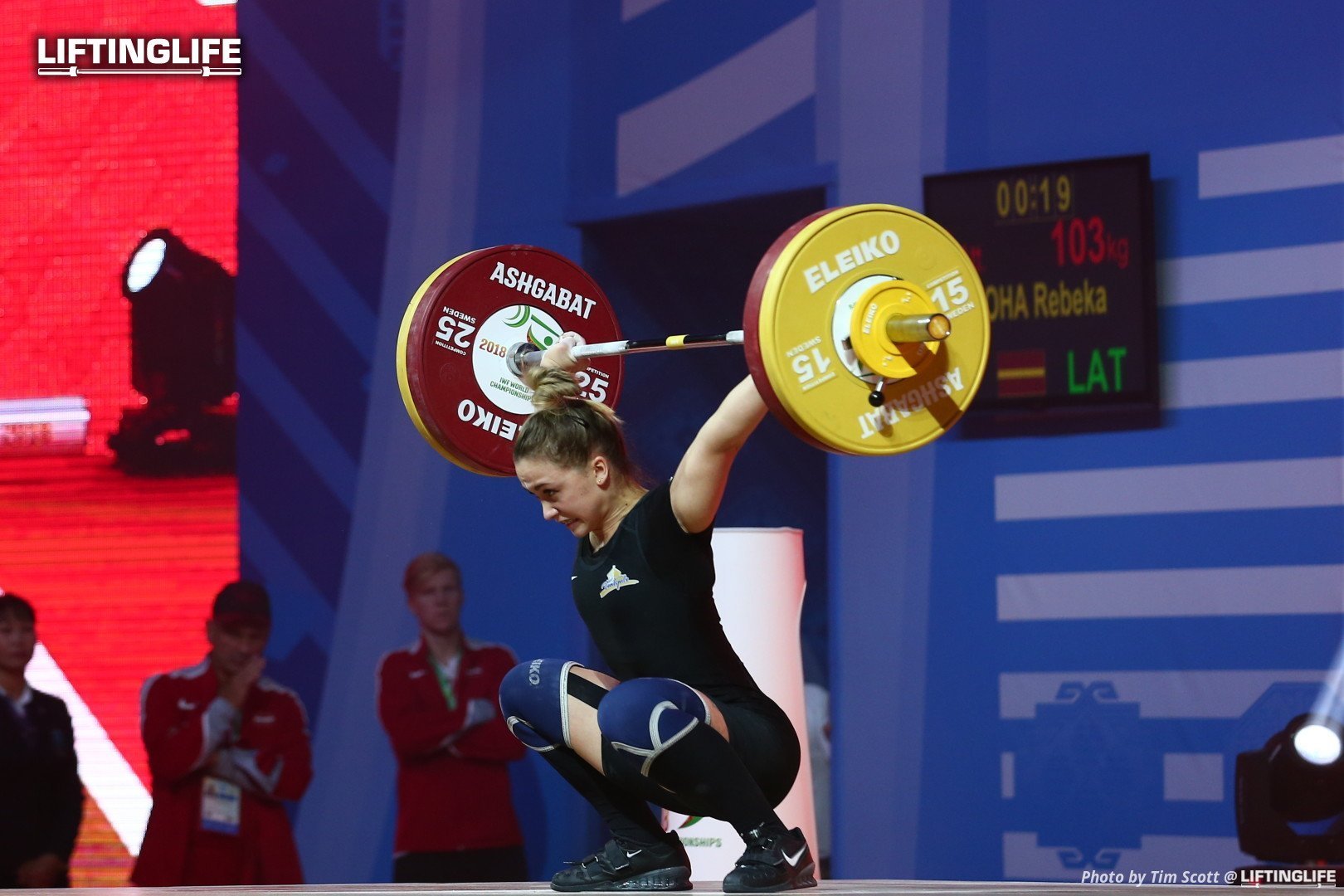 Before we start, here is a link to all things European Championships (start list, schedule…) and here is our Tokyo 2020 Qualifying Guide

The European Championships falls right at the end of the first Tokyo 2020 qualification period, so we are likely to see two types of athlete emerge based on their success over the last six months:

The first group will have already made a total in this first six month qualifying period. They will be ready to make more bold and daring attempts.
The second group will be without a total. These athletes will have to take more care and will be more likely to open lighter than usual. If these athletes fail to total then their Olympic dreams will be over. You can learn more about these two groups here.

What makes this competition even more exciting? It’s a gold-tier event, meaning that athletes’ Robi points will go through a 1.1-times multiplier, giving them a 10% Robi bonus. There are lots of points up for grabs. Want to know your Robi/Sinclair?

Who to watch out for?

Below is a table we have put together of all of the women who currently have top 5 entry totals in their weight class who are still yet to make a total in this qualifying period. Failure to total at the European Championships for these women will result the end of their Olympic dreams, at least this time round.

So who are some of the lifters we should be looking out for?

These photos were all taken by our friends over at Lifting Life. Check out their instagram and show them some support.

Rebeka Koha, who has the second most Robi points in Europe among the women, sits in the first group of athletes. She has already successfully totalled twice at Olympic qualifying the 2018 IWF World Championships (Gold tier) where she secured 1,023 Robi points (103/124 kg), and the 5th International Qatar Cup (Silver tier) where she secured 853 Robi points (100/118 kg). Rebeka is most likely looking to use the European Championships as a chance to use the 10% Robi bonus to her advantage and hit a total that will eclipse her performance from the Qatar Cup, allowing her to carry forward her performances from Worlds and Europeans into the second qualifying period.

Knowing the way Rebeka and her coach tend to handle meets, it is unlikely that we will see her make any crazy jumps, but more likely build on each lift from Worlds by a kilo. An additional kilo on each lift from her Worlds performance would give her a 229 kg total, 957 Robi points which would become 1,053 points post-multiplier. She would head into May with 2,076 Robi points (1,023 + 1,053), which would keep her in 3rd place overall in the 59 kg weight class world wide, just below Chen Guiming (2,164) and Kuo Hsing Chun (2,245). Of course, this doesn’t take into account the continental performances of the other 59 kg women during April.

Loredana Toma is another athlete who sits in the driver’s seat at the European Championships, falling into the first group, having already received 944 Robi points from her performance at the 2018 World Championships (110/124 kg). Despite sitting 19th in the 64 kg class Robi rankings, Loredana is really in 6th. The reason for this is that thirteen of the higher ranking athletes have competed twice already and so have a combined score above Loredana. Their individual performances are lacking behind Loredana who, once she totals at the Europeans, will leapfrog all of these other athletes. She has received more Robi points in one competition than any other European -64.

Loredana will almost certainly be unable to take the lead worldwide in the -64 kg category due to Deng Wei’s prowess. Deng Wei is a four-time world champion, an Olympic champion, and a seven-time world record holder whose 2018 Worlds performance gave her 1,207 Robi point and whose IWF Grand Prix performance gave her 1,183, which would have been 1,240 had it been a Gold tier event.

Even so, Loredana can certainly further solidify herself as the leading -64 in Europe and looks to win her 3rd straight continental title. If Loredana can put her best individual lifts together (110/131 kg) she will receive 1,041 points. Considering Loredana’s phenomenal training videos recently which include a 100 kg snatch triple (shown below) and a 200 kg back squat, a performance of this calibr seems possible.

Emily Muskett finds herself in the second of the two groups. So far she is without a total from this first qualifying period and so is in need of securing one if she is to make an attempt at an Olympic spot. Should Emily be able to land a total at these European Championships there will be no shortage of opportunity for more competitions in the following six-month qualifying period with the British International Open (Bronze) in May, the Commonwealth Championships (Silver) in July, and of course the gold-tier World Championships in Considering these opportunities for future totals, it is likely we see a relatively conservative performance for Emily, particularly in her opening attempts as she cannot risk bombing out.

Emily Muskett has improved tremendously over the last year from a low pack finisher at the world level all the way of to becoming the 2018 Commonwealth Games champion with a spectacular six-for-six 96/126 kg performance.

Tatev Hakobyan is another weightlifter who falls into the dreaded second group. Having bombed out of the 2018 World Championships in the -81 kg weight class with a 104 kg snatch Tatev is still yet to secure a total, without which her 2020 Olympic dreams will be over. Securing a decent total in each of the three qualifying periods is only half of the battle for Tatev, whose country of Armenia has had sixteen violations with regards to drug use and so their allocations for the Olympics have been dropped to two men and two women.

With an entry total of 250 kg, 20 kg over her previous best international total, Tatev stands out as a particularly exciting name on the European start list. Whether or not we will see her risk bombing out in search of a huge total and one of only two potential spots for Armenian women in Tokyo 2020, or whether she will play it safe and aim to build over the coming months, we do not know. She will be facing Russia’s Diana Mstieva whose 244 kg total from the 2018 World Championships has left her with 592 Robi points.

Tatiana Kashirina has been regarded as the strongest woman of all-time since the first of five World Championship titles in 2010. Tatiana not only has the heaviest lifts of all time for any woman (155 kg in the snatch and 193 kg in the clean and jerk), she also has the highest women’s Sinclair of all time, an unbelievable feat for a super heavyweight.

Tatiana currently has more Robi points than anyone else in Europe, female or male. Her triple world record performance from the 2018 World Championships of 145/185/330 kg gave her an insane 1,218 Robi points. A particularly tough 2019 IWF World Cup battle against the two Chinese supers Meng Suping and Li Wenwen (shown below) might have left Tatiana feeling wary, having placed 3rd, but the 1,083 points that she managed to secure there has left her with a great opportunity to attempt something enormous, particularly without any real pressure or competition from anyone else in her weight class.

Russia has received an enormous twenty-seven doping violations since the 2008 Olympics and so has had its Olympic spots reduced to just one man and one woman. Despite Tatiana having by far the best lifts of the Russian women, her Chinese competition is extremely stiff so it won’t be as simple as her just being the world record holder to be selected for the spot. The 2019 Europeans will act as an opportunity to further her own world records in a bid to push herself ever further ahead of everyone else.

If Tatiana is to finish the first qualifying period with the most Robi points of any weightlifter in the world she will need to total 327 kg or more, something she has done eight times internationally throughout her career. This does not take into account the potentially improved Robi totals of Deng Wei and Hou Zhihou who we may see at the 2019 Asian Weightlifting Championships that start just five days after Tatiana competes.

Tatiana Kashirina is a seven-time world medalist, winning five times in 2010, 2013, 2014, 2015, 2018. She is the 2012 Olympic silver medalist and has set an enormous twenty-three world records throughout her career. Tatiana has snatched and clean and jerked more than any woman in history and also has the highest female Sinclair of all-time. Tatiana has won an enormous seven European Championships already and looks to add an easy eighth next month. What is perhaps most impressive about Tatiana is her consistency, rarely matched by any other women ever. She has snatched 140 kg or more thirty times in international competition and has clean and jerked 170kg or more thirty-two times. Tatiana is a living legend of the weightlifting world.

Seb OstrowiczI am the owner of Weightlifting House. When I'm not working on the site/podcasting/interviewing I spend my time training, coaching, and competing in the sport of Weightlifting.
Posted in:
News
Tagged:
for-fans, Who to watch
Leave a Reply Cancel reply