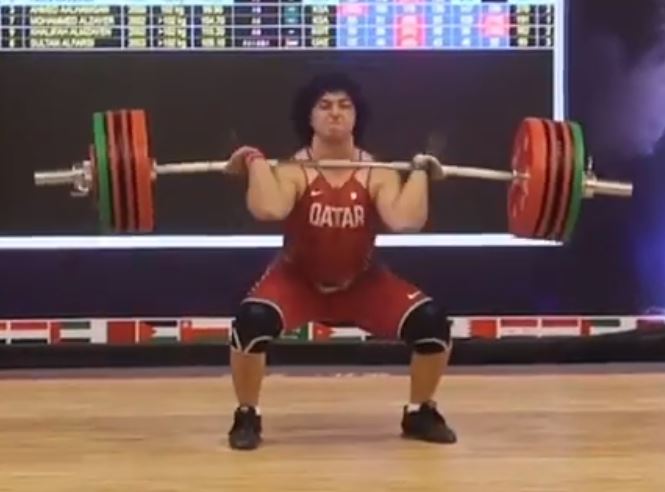 The two-time junior world champion Meso Hassona just power clean and jerked 200 kg at an Asian Championships warm-up meet after snatching 173 kg. The last time we say Meso compete was at the Qatar Cup In December 2018 where he hit a monstrous 225 kg clean and jerk at just 21 years of age.

Just two years ago at the 2017 Junior World Championships Meso Hassona clean and jerked just 193 kg, even missing 200 kg on his third attempt. His progress since then has been staggering, lifting over 200 kg in international competition ten times since.

Meso Hassona recently told Weightlifting House that he would definitely be attempting a new World Record of 231 kg next month at the 2019 Asian Weightlifting Championships, a kilo over Sohrab Moradi. With Sohrab now undergoing surgery it seems possible that Meso Hassona might become a senior continental champion for the first time in his career having placed second last year behind Sohrab. His biggest competition will come from China’s Tian Tao and Iran’s Kianoush Rostami.

Meso Hassona (85/96), officially named Faris Ibrahim Hassouna El-Bakh, is a weightlifter from Qatar born June 4th 1998. Meso is the 2017 and 2018 Junior World Champion and the bronze medalist from 2016. Meso placed 7th at the 2016 Rio Olympics in the 85 kg class with a 158 kg snatch and a 203 kg clean and jerk. At the 2017 World Championships Meso placed second after clean and jerking 220 kg. A year later he placed third with a 171/217 kg performance. At the 2018 Qatar cup Meso won his first senior international gold medal in his home country, snatching 172 kg and clean and jerking a junior world record of 225 kg.

Seb OstrowiczI am the owner of Weightlifting House. When I'm not working on the site/podcasting/interviewing I spend my time training, coaching, and competing in the sport of Weightlifting.
Posted in:
Competition Lifts
Tagged:
Power Clean
Leave a Reply Cancel reply