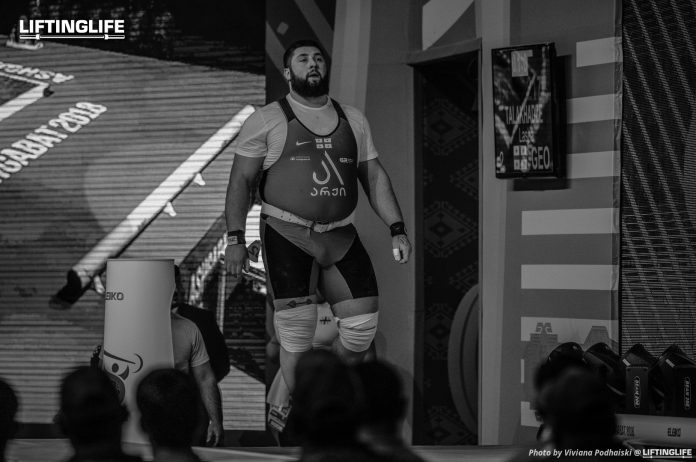 On Saturday 13th of April, on the final day of the European Weightlifting Championships, on the final lift of the final session, we are going to watch the Georgian super-heavyweight Lasha Talakhadze approach a loaded barbell. He will lift a weight that will almost certainly give him a new all-time world record total.

But what weight will be loaded on that barbell? Let’s work it out…

To work this out, we need to take a bit of a stroll back through the history of the sport to look at some of the biggest lifts of all time. We can use these to compare and evaluate Lasha Talakhadze.

At the 1987 World Championships in Ostrava, Antonio Krastev of Bulgaria hit the heaviest snatch of all time at 216 kg, a record he had single-handedly advanced incrementally from 212 kg over the prior year. These days Antonio Krastev no longer holds the all-time snatch record. At the 2017 European Championships Lasha Talakhadze made history with his first all-time record – a 217 kg snatch – stripping Krastev of his claim to fame.

At the 1988 Samboy Chips Cup in Canberra, Leonid Taranenko of the Soviet Union put forward the heaviest clean and jerk and total of all time with a 210 kg snatch, a 266 kg clean and jerk, and a 476 kg total. That performance gave Taranenko a Sinclair of 480.72 – the 13th highest of all time. These days only his clean and jerk stands as an all-time record, with Lasha having taken ownership of the total world record at the 2017 World Championships with 477 kg. At this competition, he also advanced his own world record snatch of 217 kg straight to 220 kg.

So right now, the only all-time record that Lasha Talakhadze does not own is the clean and jerk record. At the 2016 Rio Olympics Lasha made a personal best of 258 kg, setting a new World Record total of 473 kg. This is the most weight that Lasha has ever jerked in international competition, though he did make 264 kg for an unofficial world record at the 2018 Georgian nationals. Even so, this is still two kilos shy of Taranenko’s 266 kg from thirty years prior. So will he go for it?

Lasha Talakhadze famously said that he wants to become the first man ever to total 500 kg, a goal no one else has ever seriously considered. In the pursuit of this it is almost mandatory that Lasha will have to move beyond this 266 kg barrier at some point, but when?

With the change in weight classes last year, the world records have all changed again, but due to his 217/257/474 kg performance at the 2018 World Championships, Lasha owns them all again. It does not seem likely that Lasha will bother with 218/258 kg to beat his current world records as these are numbers he has already made prior to the weight class changes.

In a recent instagram post by of Lasha clean and jerking 250 kg, Nat Arem mentioned that there’s ‘a rumor going around that maybe [Lasha Talakhadze] will be trying to beat the 266kg all-time C&J world record’ set by Leonid Taranenko.

Lasha’s performances in the 2019 European Championships training hall have been nothing short of astonishing. On his first he snatched 210 kg. When he last hit that in the training hall, he went on to snatch 220 kg a few days later. This 210 was markedly easier-looking and so 221 kg certainly looks on the cards for Lasha. A few days later he clean and jerked an easy 250 kg.

So what is he actually going to hit?

Option one – 221/259/480
Lasha will snatch an all-time world record of 221 kg which he will follow up with an international-best clean and jerk of 259 kg, giving him an all-time heaviest total of 480 kg. This would extend his own record by 3 kg and place him 4 kg over the 476 kg record that Leonid Taranenko hit all those years ago.

The truth is, we can’t know what Lasha is going to hit on Saturday. It is likely that the only two people in the world who do know are Lasha Talakhadze and his coach Giorgi Asanidze. But with the help of a brief look at the history of the heaviest lifts in our sport and Lasha’s competition we can begin to make a reasonable guess.

The only thing that is certain is that on Saturday, in the final session of the European Championships, with the final lift of the final session, Lasha Talakhadze is going to walk out to a loaded barbell, a barbell that will make history.

What do you think is going to be on it? Let us know in the comments below.