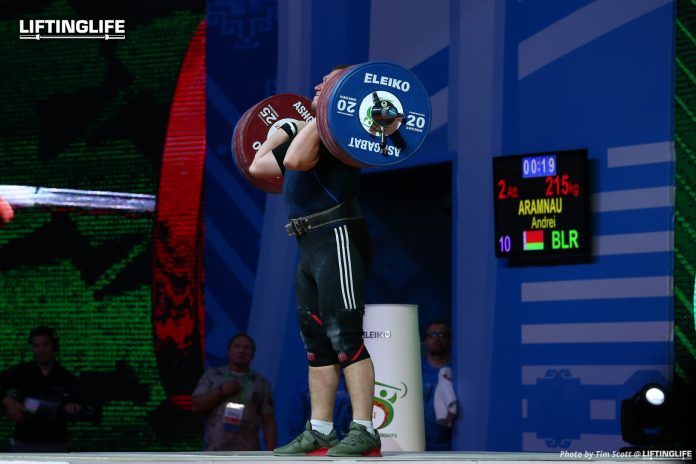 It seems that the oscillation debate has come back into the weightlifting ether, the stem of which generally comes from a lack of understanding as to what the rule actually says.

In this article, we will take a look at the exact rule as stated by the IWF technical and competition rules and regulations, as well as some interesting examples.

So, what does the IWF actually say about oscillation?

Well, the word ‘oscillation’ is only mentioned once in the entire 94-page rule book (downloadable here). In the section entitled ‘Incorrect Movements’ it states the following as illegal:

2.5.4.2 – Any deliberate oscillation of the barbell to gain advantage. The athlete must become motionless before starting the Jerk.

The first point worthy of note is that nowhere in this rule does it state that the bar must be motionless, only that ‘deliberate oscillation used to gain advantage’ is not allowed.

Things become very tricky here because we are now looking at a subjective measure rather than an objective one. Let’s take Ilya Ilyin as an example. As he stands up with the barbell out of the clean he ‘deliberately’ pops the barbell off his shoulders and counts three oscillations. On the third oscillation of the barbell he dips, a perfectly timed jerk every time.

Now, was Ilya ‘motionless before starting the Jerk’? Yes.
Was there any ‘deliberate oscillation of the barbell to gain an advantage’? We don’t really know.

We can all see that Ilya uses the oscillation to lift more weight. Many other weightlifters do this too. A good example would be Andrei Aryamnov who, similarly to Ilya, pops the bar off his shoulders, counts a couple of oscillations, and then times his dip and drive accordingly, clearly using the whip of the bar to aid in the jerk.

The issue lies where the subjectivity comes into play. Who gets to say whether the pop off the shoulders was used to readjust grip/position, an entirely legal move, or whether it was used for oscillation purposes? I am sure that Ilya and Aryamnov would claim it was used to readjust their grip and get into a better position before the jerk, and who are the judges/referees to claim that Ilya or Aryamnov are lying? There is nothing in the rulebook that states that an athlete cannot make the most of the oscillation on the bar, only that they cannot deliberately add to the oscillation. Who is to say that Ilya and Aryamnov are not just making the most of the situation at hand: an oscillating barbell.

We see many lifters stand up the barbell out of the clean and do the exact same move. The difference is that they wait a little bit longer than Ilya and others like him before they perform the jerk. Both lifters have stood up, both lifters have popped the barbell off their shoulders, both lifters have become motionless before the jerk. The only difference is the use of the oscillation by Ilya and others like him. They initiated the dip and drive sooner. There is nothing in the rule book to say that an athlete cannot use the oscillation, only that there cannot be ‘Any deliberate oscillation of the barbell to gain advantage.’ Because there is physically no difference between Ilya’s pop of the bar and Tatiana Kashirina’s pop of the bar, Ilya cannot be called for deliberate oscillation, or so too should all of the other lifters who readjust their grip and position.

Take a look at the following two videos of Ilya Ilyin and Tatiana Kashirina. The only difference between the lifts is the proximity to the pop of the barbell before the dip is initiated.

Can’t see the videos? Either disable your ad blocker or click here for Ilya and here for Tatiana.

There are cases that we see in competition where there is an undeniable ‘deliberate oscillation of the barbell to gain advantage’. An example of this would be Tian Tao. After standing up the barbell and ensuring his proper position, he makes a small but deliberate dip to initiate barbell oscillation, from which he is able to gain an advantage.

After the sudden influx of oscillation calls at this year’s European Championships, it seems Tian Tao has removed his pre-dip dip in an effort to remain legal. Compare the two examples below of his last two major competitions to notice the loss of this offense.

Can’t see the videos? Either disable your ad blocker or click here and here.

At this years Pan-American Championships there were a few high-level USA lifters who made sensational lifts and were awarded white lights for a successful attempt. A vocal minority of people have tried to make a claim that these lifts were not legal, while others claim that they were, in fact, good lifts.

By taking a deep breath before initiating the dip and drive the scapular will naturally elevate and depress. This movement is exaggerated under load because the athlete must actively shrug in order to take a deep breath. The sudden drop of the shoulders after the breath will cause the barbell to begin oscillating. This is not deliberate oscillation of the barbell, this is a result of the deep breath.

Of course, this ‘hack’ won’t have gone unnoticed and there are certainly going to be athletes who use it to their advantage. But much like the Ilya example, who is to say whether the athlete is breathing too much? Nobody can say that an athlete shouldn’t breathe like that. This is one of the grey areas of the oscillation debate. Nobody can know real intent, we can only speculate.

Much like the judicial system under which we live, the oscillation rule should probably be seen as innocent until proven guilty, with any doubt falling in favour of the athlete. As we cannot prove intent in an athlete I don’t believe anybody should receive a red light for taking a deep breath or using oscillation after a readjustment. We cannot know the athlete’s intent.

If we want to remove the grey area from the rule the IWF will need to get rid of the word ‘deliberate’ and remove any subjectivity from interpretation. We could allow all and any use of oscillation. We could require athletes to stand until they receive a signal that there are sufficiently low levels of oscillation. Or we can keep things as they are. I vote for the 3rd option.

What do you think?

Ilya Ilyin is arguably the most famous weightlifter of all-time. As much as his two Olympic gold medals and his unbeaten track...
Read more
Articles

Does Success in Coaching Attract a Particular Personality Type?

Have you ever wondered any of the following? Is there a certain personality type that is attracted to coaching...
Read more
Articles

The inclusion of transgender athletes in sport is a difficult topic to understand and prescribe rules for, not least in a sport...
Read more
Articles

A record number of 50,514 weightlifting fans voted for the 2019 IWF World Weightlifter of the Year. It is certainly reassuring to...
Read more
Articles

The 6th International Solidarity Weightlifting Championships is a qualification event for the 2020 Tokyo Olympic Games. This competition is a silver tier...
Read more