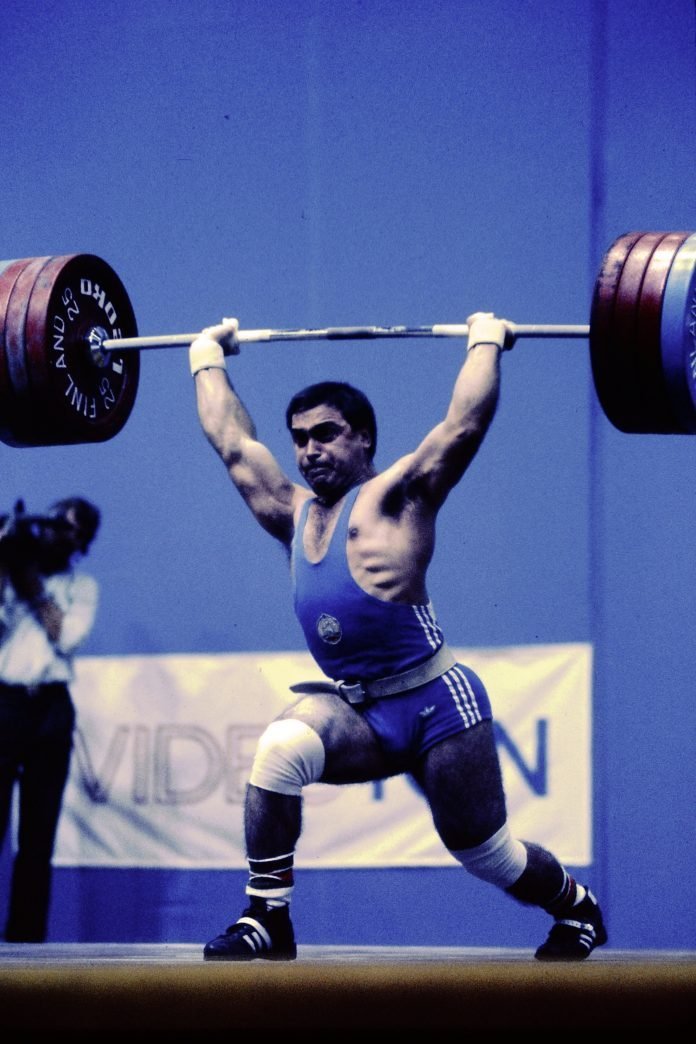 As well as being a sensational athlete, Alexander Varbanov was part of the most dominant team in weightlifting history: The Bulgarian national team of the 1980s. He was also coached by the most successful coach of all-time, the great Ivan Abadjiev, a man whom Varbanov referred to as being ‘closer to me than my father.’

This is the first part of the interview Alexander spoke about the following:

Before we get started you can follow Alexander Varbanov here, here, and here.

You clean and jerked 215.5 in the 75 kg weight class in 1987. This is one of the greatest clean and jerks of all time. Can you tell me about your training leading up to this competition?

That was the World Cup Gala in Seoul (by personal invitations only), just before the Olympics the following year. The competition winners were determined by Sinclair points and my 215.5kg Clean and Jerk gave me a second place finish behind Misho (Mikhail Petrov, Bulgaria). It was a pre-Olympic year and we worked at the gym 8-12 hours per day. The training sessions were long and exhausting, however, all of us knew why we were putting in all the blood, sweat and tears – the gold medals were waiting for us. I cannot recall exactly our training routine, but I think it was the usual – SN, C&J, SQ all over 85%/ 1RM.

You trained with the most dominant weightlifting team of all time. Can you talk a little bit about the training environment at the time? How important was the environment for your success?

It was a highly competitive environment. In my category (75) we were 5 or 6 people on the national senior team all fighting for the top spot. The competition among us was tremendous and we all were pushing ourselves to the limits to get a spot on the world team. Training in such an intense environment where every kilogram counts is stressful, but very motivating. Some were able to adapt and survive; some others gave up a few months after they got on the team.

Weightlifting is an individual sport, but I simply don’t believe in training solo, or let alone with this modern online coaching thing. To this day I tell my athletes how important it is to train with a team, not alone. The training environment is a huge factor in making progress. You know, sometimes only watching others lifting may push you to train harder; or a small change, let’s say a new pair of shoes, or new training equipment – new plates or barbells…

What were your best ever training lifts?

What were the most impressive lifts that you ever saw in training? Zlatev, Blagoev, Chakarov, Botev etc.

Antonio Krastev’s 225kg Snatch with straps, Zlatev’s 190kg Snatch and 230kg Clean and Jerk. Botev, he was like a machine – 210kg Snatch, 270kg Clean. His bodyweight at the time was around 115-120kg. He also had a Back Squat of 370kg for 5 reps and a 1 rep max of 450kg, I believe. We would load the bar with the thin Russian 50kg and 25kg Leoko plates. As a junior athlete, in 1982 I remember watching in the gym Blagoi Blagoev with his 200kg Snatch (with straps) at 90kg bodyweight. I was mesmerised by his strength, speed and technique.”

Can you talk us through the Bulgarian System? How many times a day did you train and how many exercises did you do each session? Also how hard was the system?

I prefer to talk about it as the Abadjiev’s system. It’s simple – you will get out what you put in. The harder you work, the bigger the results. Typically, we would train 360 days a year, 8-12 hours per day (3 training sessions on Monday, Wednesday and Friday). Tonnage wise, the middleweight athletes like myself would average 50-60 tons a day, practicing mostly Snatch, Clean and Jerk and Front Squat with Monday and Friday being the heavy days. Friday would be our max day where we would have a “test” for Snatch and Clean and Jerk.

One may wonder how we survived – we did indeed. Over time you simply adapt, you get used to it. You have no other commitments, no worries about paying the bills, families, kids, job, etc. Weightlifting was our full-time job. We all were well paid for what we were doing and there were teams of specialists supporting our training and recovery – sports therapists, medical staff, dieticians, personal coaches, psychologist, sports engineer, even yoga instructor.

Part two will be uploaded in a few weeks!