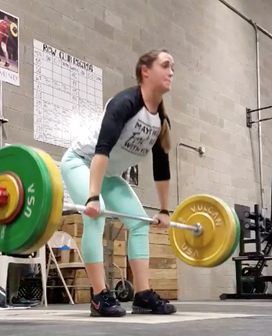 Language matters. Every weightlifting coach who has ever used verbal cues to change a lifter’s movement has an implicit belief in the power of words to change actions. So does every weightlifter who re-tools their understanding of the movement with a few words from their coach. When they are primed for it, the right phrase or cue sparks a mental and physical epiphany that can cause a quantum leap in a lifter’s technique.

Language matters coach-to-coach as well. Without a common language of the sport, meaningful conversations between coaches would be impossible. (That fourth beer in the hotel bar at Nationals doesn’t help coach-to-coach communication much either) We speak about programming and technique in an argot particular to weightlifting. When a coach uses a phrase like “prep cycle” or “amortization phase” another coach knows just what she is talking about. We use linguistic shorthand to reference a common understanding of complex concepts.

The construct of “first pull” and “second pull” that roughly describes the physics and biomechanics of the upward movement of lifter and bar in the Olympic lifts has been useful in the past for coach-to-coach discussion and debate and to impart an understanding of the movement to athletes. While having utility in this respect, the wording is not inviolate by any means. (Note the traditional wording of the “pull-under” phase now being called the “third pull” by newer coaches) However, I see describing the upward portion of the pull in only two phases as having limitations. While admitting my own limited knowledge of the fine details of anatomy and biomechanics, there are anatomical and biomechanical actions underpinning the description of each phase of the pull. I think that dividing the pull into three upward phases would be useful in furthering the understanding of the mysterious “second pull.”

The purpose of the first pull is to overcome inertia and move the bar up and in, toward the lifter, over the lifter’s base of support. Properly approached, this is accomplished for the most part by the knee extensors, the quads. By the time the bar reaches the knees, it is over the middle of the base of support, the legs are almost extended, and the hamstrings are stretched and loaded. Using the extension of the legs to define the limits of the first pull seems to me an accurate and useful description with a well-defined end point. From here things get a bit muddled, as this old CrossFit meme implies.

The traditional description of the first pull ends here:

However, from the end of the first pull, two opposing muscle groups work in sequence to attain the above position. All three muscles of the hamstring group, the biceps femoris, semitendinosus, and semimembranosus, cross the hip joint and the knee joint. They work to extend the hip joint and flex the knee joint. Under a heavy load at the end of the first pull, with the bar at the knees, a powerful effort to stand up strongly engages the hamstrings, extending the hips and flexing the knees simultaneously, automatically pulling the lifter into the power position.

This happens rapidly, especially for naturally explosive athletes, setting up a stretch reflex in the quads—the classic leg drive at the end of the second pull. With lots of reps and close attention, athletes learn to feel and accentuate that stretch reflex, adding to the leg drive that finishes the pull. The leg drive at the end of the pull is dominated by the quadriceps extending the knee.

Given how well we can divide the actions of the two major muscle groups primarily responsible for actions in the second pull, and define clearly where one action ends and the next begins, it seems more practical to me to segment the two actions when describing them. It takes some of the mystery out of what happens between the end of the first pull and full extension. So first pull would describe the movement of bar to knees, second pull from knees to the power position, and third pull from power position to full extension of the legs and hips. (Which I guess leaves us now describing the pull under/third pull the fourth pull)

Further segmenting the language used to describe the pull need not segment the lift as executed by the athlete. Any cue or explanation poorly applied can lead to poor execution. But a description that acknowledges the importance to the hamstrings in the initiation of the extension of the body from the end of the first pull can have a few advantages when teaching technique and planning strength cycles.

The cue to “stand up” at the end of the first pull—forcefully engaging the hamstrings—tends to keep the heels down longer and help the bar stay over the base of support better than the cue to “jump” in my experience. The feeling engendered by that cue imparts to the athlete a visceral understanding of the role of the hamstrings in the pull. (As evidenced by the complaints of many of my newer athletes about hamstring soreness)

The division of the understanding of the second pull into two upward phases should also reinforce the importance of strong hamstrings in the pull. Contrary to popular belief, it is decidedly NOT all about squats. RDLs, Good Mornings, Glute/Ham Raises, and yes, even Leg Curls, need to be an important part of any strength training for weightlifters. These exercises aren’t as sexy on social media as a big back squat, but they are just as important to success in the lifts.

My hope is that this article will start a useful discussion between coaches, but it will probably also start the trolls and meme accounts on their usual path of destruction. Like I told Travis Mash, being trashed on the internet is how you know people are paying attention. So troll away and let’s start talking about this.

Dan Bellhttp://www.rubbercityweightlifting.org/
Dan Bell has coached weightlifting exclusively for nearly 18 years. He is a USA Weightlifting National (Level 2) coach and has guided weightlifters to the national and international level, as well as helped hundreds of Crossfitters improve their weightlifting technique. Coach Bell has been involved in weight training and barbell sports for over forty years. His strength journey has taken him from preparing for high school football and wrestling to powerlifting, strongman training, and finally, Olympic weightlifting. He compares weightlifting to a 300 pound golf swing. The technique is that demanding and precise. He believes weightlifting to be the ultimate test of speed, strength, flexibility and athleticism.

Sergei Putsov has been an athlete since he was seven years old. Initially, he started by playing tennis, but having a father...
Read more
Articles

Intro Glenn Pendlay, aka The People’s Coach, will forever be enshrined as one of the most impactful figures in...
Read more
Articles

Watch the full Weightlifting News as we cover everything that has happened to the IWF over the last 72 hours.
Read more
Articles

Spencer Arnold of Power and Grace Performance is on the rise in the weightlifting world. From someone who started as an undersized...
Read more
Articles

Here is this week's update on the sport of Weightlifting - 03/09/20 https://youtu.be/iDzmIhg1uW8
Read more
Articles

Calling all Weightlifters! We are sending out a call to all competitive Weightlifters to participate in a survey...
Read more