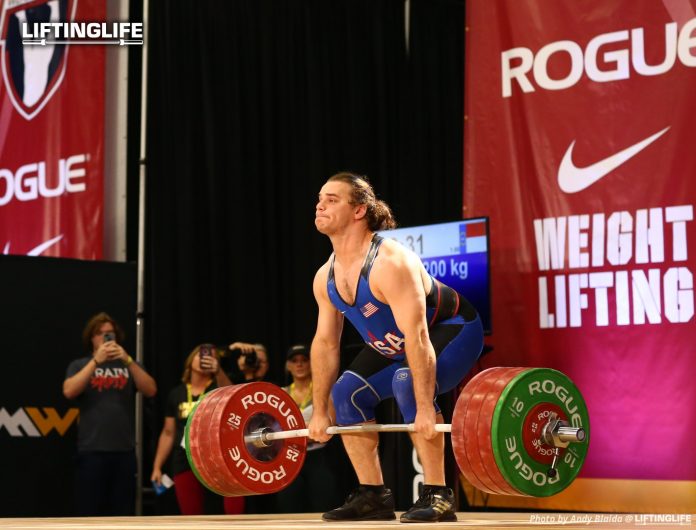 With a week having passed since the Nike USA Weightlifting National Championships powered by Rogue Fitness which took place in Memphis Tennessee, let’s take a look at the top performances of the men and women by way of Robi points.

But first, what are Robi points?

Hunter snatched 94 kg and clean and jerked 112 kg for gold medals in the snatch and total of 206 kg, giving her 673.8 Robi points. Since dropping weight from the old 69 kg weight category by 10 kg, Hunter is on an absolute tear. She burst onto the international team at the 2018 World championships as a 64 kg lifter where she went 90/117, lifting just a kilo more than at her current lighter body weight.

Despite her 3 for 6 performance, Caitlin dominated the competition last week with an 88 kg snatch, a 106 kg clean and jerk, and a 194 kg total. She out-totalled her world performance of 85/106 by 3 kg, ending with 648.6 Robi points. Having recently moved to team Academy of Weightlifting, Caitlin’s lifting seems to be going pretty well.

Impressively, Sarabeth was able to nail the 4th highest Robi points despite missing 4 out of her 6 lifts. After missing her opener of 90 kg she courageously jumped up to 92 kg on her 2nd attempt which she made. Coupled with a 111 kg clean and jerk opener she was able to total 203 kg for 641.7 Robi points. With a couple of attempts remaining she did take a shot at the gold medal in the total but unfortunately left without it. She will be back, stronger than ever.

3 gold medals for Alexandra as she hit a huge 105 kg snatch and a 122 kg clean and jerk for a 500 lbs/227 kg total and 629 Robi points. Considering the American record in the snatch of 110 kg was only recently hit at the Pan American Championships last April by Kate Nye, Alexandra is unbelievably close. Hopefully this national title will give her the boost needed to look for an American record one day.

38 year old Jason Bonnick put up a great total despite a shaky start. After missing his first two snatch attempts he came back with 155 kg which, coupled with a 193 kg clean and jerk, gave him 624.4 Robi points. The 38-year-old is still lifting at an exceptionally high level, having most recently lifted at his first World Championships in 2018, snatching 157 kg and clean and jerking 196 kg.

Shacasia’s training leading up to this competition looked great, having low hang snatched 110 kg and snatched 111 kg from the floor, 3 kg over the American record. At nationals she took gold in both lifts (106/130), totalling 22 kg more than the silver medalist. After making her opening snatch of 102 kg Shacasia missed her first try at 106 kg, an attempt which if she had made would have offered her an opportunity at an American record attempt. I’m sure it won’t be long before she finally gets that record.

Travis Cooper is a real legend of USAW. As a 5-time USAW national champion and a 2-time Pan American medalist, this was just another day at the office. Travis went 140/178/317 for 615 Robi points. In the past we have seen Travis snatch over 150 kg and clean and jerk over 190 kg, but considering his back off from higher levels of competition since the Olympic trials in 2016, Travis’ performance here was solid.

Danielle Gunnin not only won her first senior national medal last weekend, she won three gold medals in the 64 kg weight class. With a 4 for 6 performance of 94 kg in the snatch and 115 kg in the clean and jerk, Danielle ended her performance with 589.8 Robi points. After being almost unable to walk through injury at points last year, this was a comeback to remember.

Trevor is the 3rd 96 kg weightlifter to make the top 10 list, demonstrating the general trend of strong sub heavyweight classes in the USA. Lifting for Alee Athletics, Trevor snatched 155 kg and clean and jerked 187 kg for a 342 kg total and 589.4 Robi points. At just 23 years of age, Trevor is quite the young talent. Watch this space!

Kazakhstan has withdrawn as the host of April's Asian Weightlifting Championships, with Uzbekistan picking up this crucial Olympic qualifying competition.
Read more
News

The weightlifting news from this week (Feb 13th-20th) includes: The plan for more athlete power within the IWFChina's superstars...
Read more
News

An Athlete Advisory Council has been proposed at an IWF 'think tank' meeting held at the International Solidarity Championships in Tashkent, Uzbekistan.
Read more
News

The weightlifting news from this week (Feb 5th-12th) includes: The battle for Olympic spots in the -96kg class...
Read more
Competition Lifts