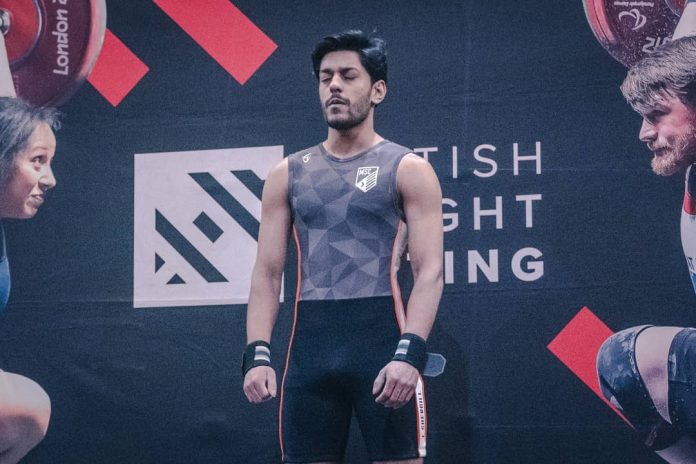 The Most Outrageous Jump In Weightlifting?

Among all the big names at the British Championships and International Open last weekend, you could be forgiven for not recognising that of Jaswant Shergill. Although he lifted at the 2014 Glasgow Commonwealth Games, the British lifter has not competed at any major events for a few years due to injury. However, the -67 lifter representing MSC Performance, pulled a brilliant performance out to become the 2019 British -67 Champion.

Shergill was seven kilos behind his rival, Haroon Siraj, after snatches. His opening clean and jerk of 130 was answered with a 135 from Siraj. Shergill then raised his second attempt to bring Siraj out first. A successful 140 from Siraj left Shergill needing 148 – an eighteen-kilo jump – to move above his opponent. Surely he would admit defeat at this point.

Those who have seen Jaswant in competition know that he is probably the bravest lifter in Britain, with a reputation for throwing himself under weights that almost anyone else would give up on. So, it was not entirely a surprise when the change went in and his second attempt would be 148 – an increase of over 20% of his body weight and well above his previous best. No one really expected him to get it though, except perhaps himself and his coach Josh.

Haroon Siraj and his coaches apparently did not expect him to succeed. Rather than selecting a modest jump for this third attempt to increase the challenge for Shergill, he took a large increase of his own – nine kilos to 150 – presumably aiming for a personal best.

So, Jaswant Shergill walked out to the platform for his second clean and jerk to attempt eighteen kilos more than his opener. The clean was far from comfortable – one knee almost buckling and a huge effort required to stand up. However, he got set for the jerk, threw the bar overhead and somehow managed to stabilise himself underneath it. His arms wobbled a little in the lockout but it was good enough for the three referees and the jury – he got white lights, the lift and first place in the standings.

Haroon Siraj’s team quickly dropped his final attempt to 149 – the minimum allowed under the rising bar rule – but was unable to complete the jerk. Shergill’s epic jump from 130 to 148 had won him the title.

Josh James, Jaswant’s coach told me: “It was truly remarkable to see an athlete be so determined and focused at the task at hand. It takes a certain character and mindset to back yourself under pressure and ultimately bring the gold medal back home. Jaswant is a fantastic athlete with a lot more potential to be unlocked. Exciting times are ahead for his lifting career and performance”.

I would agree with Josh based on this performance!

You can see all of Shergill’s lifts on instagram:

The whole session is available to watch (there are only three lifters so it’s quick!) on British Weight Lifting’s facebook:

It’s worth a watch for the commentary from the Sinclair Debate podcast team and Stu Martin, BWL Performance Manager.

Ramsey Kechacha of the Sinclair debate has coined the term “Jaswanting” to refer to someone attempting something that by all rights should be physically impossible but managing to do it anyway.

If anyone knows of a more outrageous jump in competition, get in the comments below and let me know – I would love to hear the story and see the lift!

Since posting this article I have spoken to Jaswant and he told me this isn’t even the biggest jump he has taken. When I asked what his biggest ever was, he said “You wouldn’t believe me!” before then revealing that in training he once did a clean and jerk session that went bar–70–100–140. He says he likes to set himself challenges in training to build mental toughness. That approach certainly paid off for him at this competition!