Weightlifting House
Olympic Qual | IWF Allegations | Coronavirus
Home News Sohrab Moradi Out of the World Championships, So What Next? 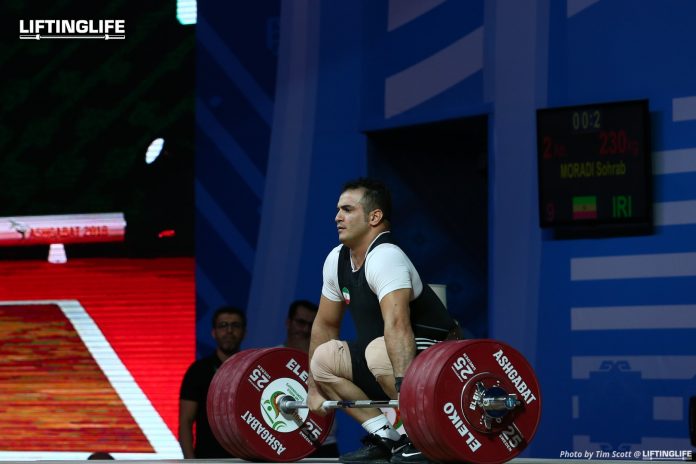 Sohrab Moradi Out of the World Championships, So What Next?

With Sohrab Moradi now confirmed out of the 2019 World Championships, the question on everybody’s lips is whether or not he still has a chance at Olympic qualification.

Now that the Olympic qualification system is so much more involved with the many meets that make up the preceding 18 months, any injury can potentially be fatal to the Olympic dream. To learn the full ‘ins and outs’ of the qualification process click here.

How Does Qualification Work?

In short, an Olympic qualification spot in Tokyo is heavily tied into the consistency of good performances by an athlete, starting at the World Championships two years prior to the Olympics. No longer can a lifter perform incredibly just the once and still qualify for weightlifting’s biggest stage. The dislocation of and subsequent surgery on Sohrab Moradi’s shoulder means that he will be out of action for even longer than he already has been, removing even more possibilities at registering totals during this important time.

An athlete must compete six times in preparation for the Olympics, totaling four times, with at least one of those four totals coming from each of the three six-month qualifying periods.

These six months periods are dated as follows:

So far Sohrab Moradi has only competed in the first of the qualifying periods: once at the 2018 World Championships where he totaled an enormous 1,242.7 points, and once at the Fajr Cup where he simply weighed in.

He is therefore required to compete at least four more times, three times making totals, with one of those three times in this second qualification period… which runs out soon… ouch!

Considering Sohrab Moradi is pulling out of the World Championships in September he will then only have one month after which to place a total (October). To make this an even more complicated situation for Sohrab to navigate, it is evident that Sohrab really has suffered a significant injury, prioritizing a tiny competition in October that offers no bonus points just for the sake of two more weeks rest rather than competing at the world championships which offers him a 10% Robi point bonus. This assumes that Sohrab even plans on attempting to lift. The best-case scenario finds him simply finding a way to compete rather than optimizing points.

The two competitions in which Sohrab could compete in October are as follows:

Should Sohrab compete in either of these competitions he will then be eligible to continue along his journey towards the Olympics where he will have to compete three more times, totaling a further two times. By way of Robi point bonuses and additional recovery time, the most favourable competitions for him to then total at will be the 5th International Fajr Cup in his home country, a silver tier competition that offers a 5% Robi point bonus, and the 2019 Asian Championships, a gold tier competition offering a 10% bonus..

If Sohrab Moradi fails to compete in October then his chances are over. Even if Sohrab does make it through the gauntlet that is the next 9 months, he will still have to average moreover his four performances than teammate and rival Kianoush Rostami, the 2016 Olympic Champion and world record holder, who is in decent shape and can afford to compete at the 2019 World Championships in search of the 10% bonus that will be lost to Sohrab.

It might not be goodbye Moradi yet, but the weightlifting superstar now finds himself in the clutches of the new Olympic qualification system.

Three Russian weightlifters, who were already under investigation for doping, have tested positive for banned drugs according to the IWF.
Read more