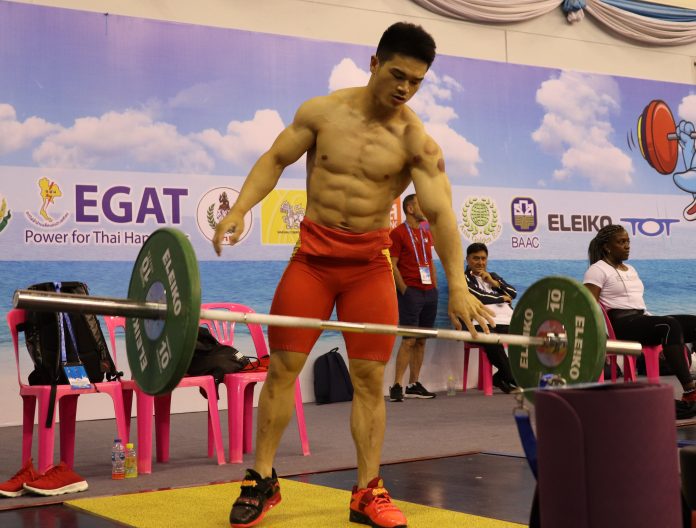 The 49th ‘Challenge 210’ takes place next week in Tramelan, Switzerland, October 24-27th. This competition is a bronze tier qualifying event for the 2020 Tokyo Olympics and acts as one of the six necessary competitions that can fulfill qualification.

Amongst those on the start list for this competition are China’s A-team, a team that comprises seventeen World Championship titles, including five-time world champion Lu Xiaojun, and three-time world champion Shi Zhiyong. China’s Deng Wei and Wang Zhouyou are indeed lacking, thought the rest of the squad is out in full force.

Whether or not all of these athletes will actually be competing at the upcoming competition or will simply be weighing-in in order to fulfill what counts as ‘competing’ in the eyes of the IWF, we do not know, though participation from them all seems highly unlikely.

Below is a look at who we can expect to see at the 49th ‘Challenge 210/, how many of the mandatory six competitions they have so far competed in, as well as their highest achievements in the sport.

Wanqiong Zhang – Zhang has competed three times so far. She is a two-time world medalist (2018-19).

Dayin Li – Li has already competed five times. A performance seems unlikely due though he may well pull a hail mary and take attempts all-new world records in an attempt to move further ahead of teammate Lu Xiaojun. Li is a two-time world medalist and the 2019 Asian Champion. He may be looking to surpass his 2019 Asian Championships performance, for which he received his lowest Robi points so far, with new world records.

Fabin Li – Li has competed five times thus far. His Robi point stronghold over the 61 kg class puts him in a dominating position. He is the 2019 World Champion and two-time Asian Championships champion.

Fulin Qin – Qin has competed four times but only totaled three times. He is a 2018 world medalist but bombed at 2019 World Championships last month. If he is to catch Li Fabin he may well need to attempt world records here.

Wenwen Li – Li has totaled at four competitions. Despite owning all world records she may need to put in another impressive performance to convince the Chinese federation of her position at the Olympics due to Russia’s Tatiana Kashirina. She may well simply weigh in. Li is the current world champion and Asian Championships champion, holding all senior world records at just 19 years of age.

Yue Kang – Kang has competed three times and is likely to compete again in order to catch up with teammate Wang Zhouyou who currently sits atop the 87 kg weight class. Kang is the 2015 world champion, medaling at three other world championships.

Lijun Chen – Chen is a real veteran of the sport. He has competed four times during the qualification process, totaling three times. Though he does not need to place a total in Tramelan we may see him lift in order to avoid totaling at the 2020 Asian Championships in April. Chen is a four-time world champion (2013/15/18/19).

Lyudong Feng – Feng has competed three times but will need a miracle if he is to overtake teammates and Chen Lijun (67) and Shi Zhiyong (73). His competition at this meet is essentially irrelevant to his Tokyo 2020 chances. Feng is the 2019 world silver medalist.

Tao Tian – Tian has competed and totaled at four of his six competitions. Despite sitting atop the 96 kg weight class Tian is not guaranteed selection for the 2020 Olympics. His chances of a gold medal are perhaps slimmer than his teammates due to his below-average make to make/miss ratio and the return of Olympic champion Sohrab Moradi (IRI -96) who returns to competition in Tramelan also. Tian is the current world champion and an Olympic medalist.

Xiaojun Lu – Despite having totaled at only three of four qualifying competitions so far it is unlikely that we will see Lu compete in Tramelan. After an incredible performance in Pattaya last month he will need to rest his back after sustaining an injury. His chances at qualifying for the Olympics over Li Dayin will fall on his ability to make the most of the gold tier Asian Championships 2020 event in April. Lu is a five-time world champion and the 2012 Olympic champion.

Zhe Yang – Yang has competed five times thus far. Because China can only take four men to the Olympics it is unlikely that Yang will be selected due to the prowess of Armenia’s Simon Martirosyan. His participation or lack there-of in Tramelan is likely irrelevant to his Tokyo qualification. Yang is a two-time world medalist, an Asian Championships champion, and a two-time Asian Games champion.

Zhiyong Shi – Shi has competed and totaled four of the required six times so far. It is unlikely that he will compete here as he is already the number one ranked 73 by some way and does not need another total during the second qualifying period. Shi is a three-time world champion and the 2016 Olympic champion.

This is another, perhaps overdue, installment in the Five Things I Learned series. Once again the article is highlighting insightful, thought-provoking information...
Read more
News

The second of three six-month qualifying periods for the weightlifting at the Tokyo 2020 Olympic games finished at the end of October...
Read more