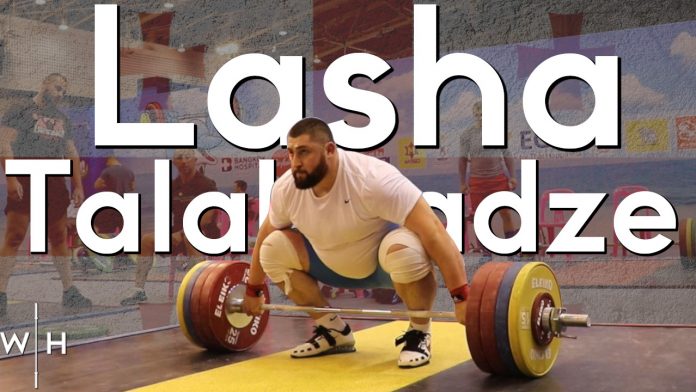 In 2016 at the Olympics Lasha’s 473 kg total overtook the best of Alexander Kurlovich of the Soviet Union.

By the 2017 World Championships, Lasha totaled 477 kg, moving beyond the strongest ever, Leonid Taranenko, also of the Soviet Union, into the unknown.

Lasha is his own Roger Banister, not only the first to break the 476 kg total of Taranenko that had, for nearly 30 years, remained unbeatable, but also moving beyond that total, out into the unknown with no sign of slowing down. In fact, if anything he seems to be speeding up.

At the 2019 European Championships Lasha totaled 478 kilos, and then at the 2019 World Championships, 5 days after this very training session, Lasha jumped up by a further 6 kilos to 484 kg, separating himself from names like Anatoly Pisarenko and Hossein Rezazadeh by 19 kg and 11.5 kg respectively.

500 kg is a total that has always been regarded as an absolute ceiling of human capability in weightlifting, a total that no one would ever be able to touch. With Lasha now towering above the limits of history, we are seeing for the first time someone who is heading towards this ceiling, full steam ahead.

You can watch more from Lasha on the W|H Patreon page.

Accessory work accounts for the majority of training volume, and so watching it being performed reveals a lot about the athlete. This session, from...
Read more
Competition Lifts

Harrison Maurus, the talented young US 81, and Antonino Pizzolato, the Italian powerhouse, battled 'each other' at the Roma Cup last year. https://youtu.be/KAZLfKeZqIs
Read more
News Show

At 36 years of age, Lu Xiaojun exceeded the World Record yet again in training. Clarence Kennedy graced us with some highlights from his...
Read more
Competition Lifts

This week, Georgia's Lasha Talakhadze (+109) hit the heaviest snatch ever recorded on film at 222kg / 489/lbs during a national test event. Alongside...
Read more
Lifts

This is a training session from the 2019 World Championships training hall, less than one week out from competition. Meso Hassona (QAT 96) worked up...
Read more
Articles