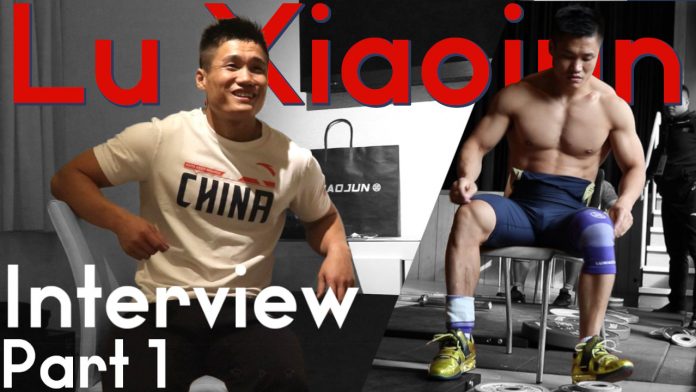 Lu Xiaojun’s Accomplishments (some, we don’t have much time..)

Learn more about the life, career, and greatest performances of Lu Xiaojun in The Greatest Weightlifters of All-Time

Lu Xiaojun has never been interviewed outside of China, and so when Weightlifting House received the go-ahead to sit down with the champ and ask ‘almost’ anything, we leapt at the opportunity.

In part 1 of the Lu Xiaojun Interview, Lu and I spoke about his greatest ever lifts both in the training, his thoughts on the balance between strength and technique, and what it is that he currently focuses on in his own training.

After a hugely covert drive to the interview destination (listen to the first part of the video) and a 30-minute wait alone in a hotel room, the Olympic champion himself turned up ready to go…

A huge thank you to Xuyao Qin and Jangho Seo and of course Lu Xiaojun Barbell for helping turn this interview into something that we all can enjoy.

You can watch part 1 below, or read the TLDR at the bottom of the page.

To watch an exclusive portion of the interview on Lu Xiaojun’s recovery, diet, and programming habits, join the Weightlifting House Patreon for just $4/month. Exclusive videos, podcasts, and programming, all weekly.

Lu Xiaojun rarely pushes his clean and jerk to maximum in competition, or takes a third attempt. This is because he usually has the gold medal after his opening attempt, followed by the world record in the total after his second attempt. As such, he regularly declines his third attempt. He says that this is why he only has one world record in the clean and jerk to his name (207kg in 2019).

Strength & Technique, and his Current Focus

Strength has always been a priority for Lu, especially as he developed in the sport. Once he turned thirty he began focusing much more on the technique and ‘sensation’ of the lifts. Lu is extremely self-motivated at the moment, believing that age is not a problem for him at all. He ‘doesn’t see it as an obstacle at all‘.

Lu believes that he tried to rely on strength too much when he was younger, causing him to be more inconsistent and ‘confused‘ on the platform. Strength is, to him, 70-75% of the success in weightlifting.

Technique, recently, has become an even greater focus and has helped him move up to a new level in the sport. Even at thirty-five years of age, Lu feels like an even better weightlifter. Because of this improvement, he ‘never hesitates‘ during any portion of the lifts.

‘It is like I get better as I get older.’

Sergei Putsov has been an athlete since he was seven years old. Initially, he started by playing tennis, but having a father who was...
Read more
Interviews