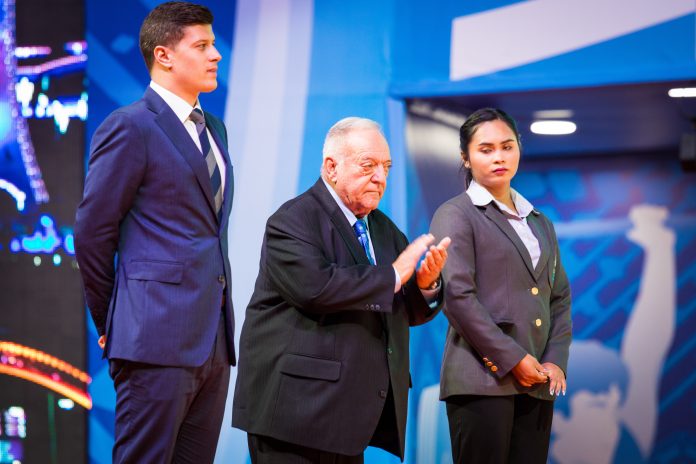 The McLaren report into corruption at the IWF was released yesterday. We have now had a chance to read it fully. Here are all of the main details from the 122-page report.

The publishing of the report looks certain to force the IWF to take some dramatic action – the recommendations of the report are at the end of this article.

Resistance to the Investigation

McLaren notes that “certain members of the EB [Executive Board] and Presidents of Member Federations” were trying to block the investigation by denying access to evidence.

Only two of the eight elected members of the Executive Board agreed to cooperate with the investigation and only one of the five continental federation presidents volunteered to assist. One of them apparently refused when asked.

McLaren’s team contacted twenty national federations to request information but only four of them responded, of which only one provided any useful information.

Only a single current athlete spoke to the investigators.

The investigation found that, far from withdrawing from IWF duties, Tamas Aján continued to exert control over the organisation, effectively blocking acting President Ursula Garza Papandrea from carrying out her duties.

“Millions in cash unaccounted for” according to the report may give rise to a criminal investigation. The report states that approximately $10.4 Million USD in cash cannot be properly accounted for, partly because of a series of “hidden” Hungarian bank accounts, for which statements have not been provided.

The Romanian Weightlifting Federation provided the investigation with receipts for payments it made to the IWF. These revealed “unexplained anomalies”, with receipts provided by the IWF not matching and receipt books that could have resolved the issues not provided as they had been destroyed. Investigation of payments from other federations showed similar problems.

There is an extraordinary story of four members of the Albanian Weightlifting Federation dividing $100,000 between them and driving it from Tirana to Budapest to pay to Aján personally, under the threat that if they did not make the payment, Albania would be excluded from the Rio Olympic Games.

The investigation also uncovered possible anti-doping corruption which could itself rise to criminal activity.

Aján’s Control of the IWF

The report notes that Tamas Aján had effective control of the IWF even before he was elected as president. He was General Secretary for two decades and in that role he moved IWF operations to Hungary from Austria, despite the then-President being Austrian.

Aján is described as using many methods to exert control over the IWF, many of which are compared to USSR-era “authoritarian management techniques”. These apparently included using cash from anti-doping fines to induce member federations to vote for him. The report includes this list:

(i) bought elections to remain in power;
(ii) complete financial control of the organisation and its accompanying bank accounts
and records including cash deposits and withdrawals;
(iii) use of administrative powers allowing for the exclusive staffing of the IWF
Secretariat; and
(iv) infiltration of the confidential Anti-Doping Commission.

The financial control that Aján took for himself is described in detail in the report. He was the only person who could move money in and out of the IWF bank accounts and he also kept significant amounts of money in cash.

Aján’s control of the IWF secretariat was enhanced by him appointing trusted friends and even family to key positions.

There have long been rumours in the weightlifting world that IWF elections are rigged and the report backs them up. An astonishing chapter of the report titled “How a Presidency is Bought” goes into detail about how the IWF democratic process was subverted.

Aján is described as bending the voting rules, permitting bribery and exchanging favours for votes. Apparently he “lavished his supporters with material experiences to ensure his Presidency”. These included stays in five-star hotels and trips on private cruise ships.

Bribed members of the Congress were given specific instructions on how to vote and were told to photograph their completed ballot papers to prove they voted correctly. The report includes a photograph of a member using their phone to do so. The voting procedure of the IWF was even changed by Aján to ensure that bribed members could not change their vote after taking a photograph – a stamp was used to prevent members using erasable ink.

There are also claims that Aján used the threat of false anti-doping positive tests to ensure compliance:

in another instance he declared to Nicu Vlad, President of the Romanian Weightlifting Federation “do not forgot, next time we must decide the countries inside the Olympic games or outside, we will decide who will be in Tokyo and who will not;” a veiled threat that the Romanian Federation may not make it to the Olympics.

In theory, Aján should not have had access to confidential anti-doping matters. In practice, he apparently got directly involved in many cases. He apparently considered himself the real authority over all cases.

One specific piece of evidence that was found was a letter from the Azerbaijan National Olympic Committee’s President, thanking Aján for delaying the suspension of some weightlifters to enable them to take part in the Islamic Games. Further investigation showed that eighteen Azeri athletes had suspensions delayed, enabling them to compete at competitions including the World Championships.

The investigation found twenty-six anti-doping cases against Turkish athletes which apparently had not been completed, along with forty-one related to other athletes. These have been forwarded to WADA, so we may well hear more about them in the future.

The report makes a number of recommendations for the IWF going forwards:

Immediately do a full forensic audit, change the voting system, stop cash payments for large sums, put better banking practices in place and continue the use of the whistleblower hotline set up by the investigation.

Longer term, make sweeping constitutional and organisational changes to prevent a similar situation from occurring in the future.

This website uses cookies to give you the best experience and help us to understand our users better. Agree by clicking the 'Accept' button. You can also choose to accept only certain types of cookies