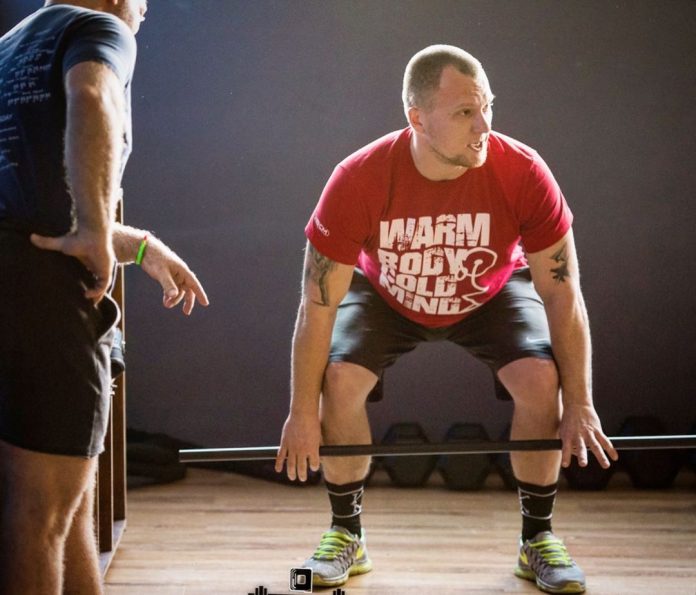 Sergei Putsov has been an athlete since he was seven years old. Initially, he started by playing tennis, but having a father who was the national team coach in weightlifting, things seemed to unfold as you’d predict.

By the age of fourteen, Sergei started training in weightlifting, reaching peak form nearly a decade later, going 163/195 in competition and 165/200 in training as a 94 kg athlete.

He continued to train but eventually shifted his focus to post-graduate studies, earning a Ph.D. in Sports Science, writing a dissertation on the differences between men and women in weightlifting training.

This was a great episode of the podcast, discussing Sergei’s come up, the Ukrainian weightlifting system, differences in programming for men and women, the best technicians in weightlifting, and the problems with the Russian manuals as we know them. We were blown away by the depth of Sergie’s expertise and his crazy stories from his career in Ukrainian training halls. Not only did he compete in the sport for nearly fifteen years, but he also educated himself on the intricacies of physiology, biomechanics, and all things weightlifting. Now enjoy what I consider to be the highlights of this episode.

Staying invested in the sport of weightlifting and training long enough to reach whatever potential you may have is not necessarily easy to do. Sessions can be grueling, progress can seem few and far between, competitions may not go well, but oftentimes what keeps us coming back are the moments where we prove to ourselves that we can overcome a seemingly impossible task placed before us. Sergei emphatically explained that his most enjoyable moments in the sport were when he was able to win himself.

Going from what explained to be shaking from fear in front of a crowd to lifting with “blood in his throat” and “anger”, fighting because it is his job. That was when he felt like he was able to overcome himself and truly enjoy the experience of competing and was his reward for showing up day in and day out to train.

Speaking for all coaches, we are always trying to individualize each program for every athlete we work with. To do that, things like training age, gender, weight class, lifestyle, and all other influential factors need to be considered during the training design. Understanding how each of these variables influence training does prescription and recovery from that training will help provide a more effective program and yield better results. Sergei’s research indicated that female athletes were able to tolerate, and you could argue needed, more frequent exposures to heavier attempts (90%+).

“Girls, due to (the) neural system and due to recovery… they (are) able to do way more lifts in critical intensity and for them recovery will be faster… For girls, they can do 100% in the morning and 100% in the evening for singles. ”

It seems that gender differences exist in how males and female athletes get prepared for heavy attempts. While it is possible that you will more often see males yelling, screaming, getting angry, and utterly fired up for a weight that they may have never touched or may not seem prepared for, Sergei reasons that for females the process should be approached quite differently. Instead of using ego to drive performance, it should be targeted systematically.

An example of this would be avoiding the use of straps for females. Sergei again mentions that the Ukrainian national team normally avoids the use of straps with female athletes, because it can create a dependency that is not easily broken.

“As soon as they realize that it’s (straps) a valuable factor for lifts, they very often start to (be) afraid to work without (them). An example, if a girl snatches with straps and snatches without straps they are two different lifts.”

This also means building confidence through successful programming, showing the females that they can make weights repeatedly and are fully capable of whatever you put on the bar. Maybe that means taking their opener in the backroom of a competition or, as mentioned above, getting frequently heavy exposures with weights that may seem daunting.

“For girls, it is way more important to feel confidence… to understand and logically think that you are able to lift more… if they feel that it is heavy it is a very big reason that she will not lift. For girls, it is very important to build a training process to make them feel that the bar is not heavy… that’s the thing that will work for girls.”

The technical style employed by Sergei, Anton Pliesnoi, Oleksiy Torokhtiy, and many other Eastern European athletes, is typical of the Soviet school. The idea is to focus on properly extending at the knee joints and mitigating the role of the hips and ankles, as it’s believed they contribute far less to the force production and bar trajectory at the point of explosion. The act of being deliberate from the bar to the heavier weights for the session will further reinforce minimal displacement of the bar from the body.

“The main joint that we focus on… to create the power is extension in (the) knee joint… The things we are trying to focus on when we warm-up is to adjust the general line of the movement, because hip extension and ankle extension will add you in total 15-20% of the power.”

To conceptualize technique and to properly place the knowledge you can gain from the Russian manuals, scientific literature, conversations with other coaches, and other possible resources, it’s a necessity to see it executed in real-time. This means that having technical models on which to base you or your athlete’s movement is incredibly beneficial. This holds for all of the movements, but knowing who can perform the movement perfectly and why you should be analyzing their technique and implementing it into your coaching arsenal also takes some deliberate effort.

Sergei puts forward a few different athletes as his technical models for the snatch, clean, and jerk. Of course some athletes perform all of the movements well, but for sake of variety and completeness, he gave us four athletes that you could use to model your movement after.

For the snatch, we’ve heard this answer before, Lu Xiaojun was crowned as the most technical snatcher of the last few decades. In the clean, Sergei opted towards Anton Pliesnoi, also citing that technique as the general approach taught in the region, but he happened to have perfected it. In the jerk, Artem Okulov displays masterful movement and shows incredible patience in the split, a component undervalued by weightlifters. As a more general technical model, Lasha Talakhadze was mentioned as being a superb athlete and one we could all learn from.

“It’s a good example that (his) coach taught him (Artem) this way. That you need to do a jerk and stay in the split position as long as needed to be successful, because the problem of most guys is that they do a good drive, but run away to the field to see the horses.”

I can honestly say this was one of the most surprising episodes we have recorded. I think Seb and I both went into it completely unsure of what we were getting into. We knew that Sergei was a good athlete and intelligent guy, but that modest appraisal was blown away by his expertise and ability to communicate his knowledge and experience in the sport. From training women, to providing technical models that bridge the theory to practice gap, it was a start to finish classic. Make sure you catch up with Sergei at one of the Warm Body, Cold Mind seminars, and say hi from Weightlifting House.